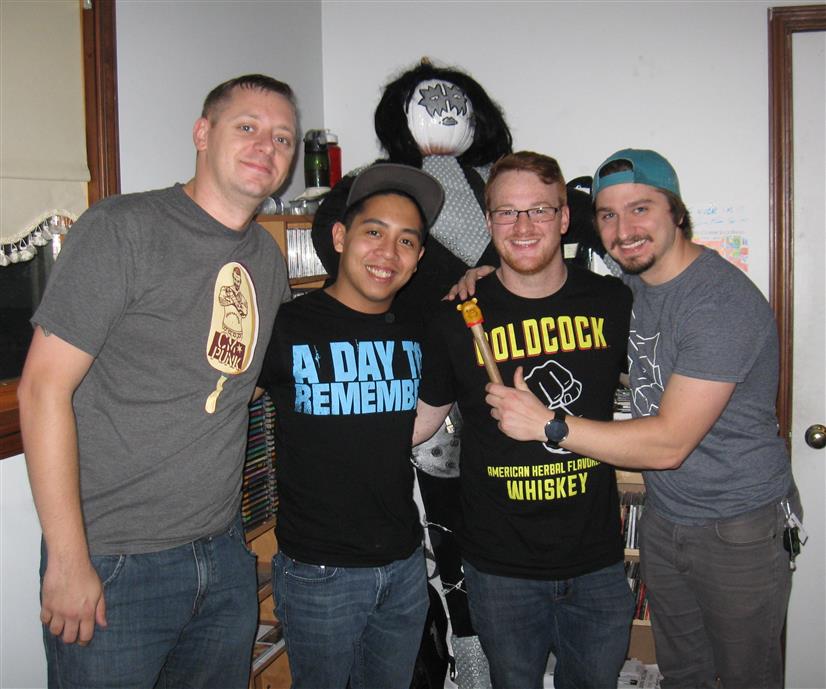 Present were, EVD, Just Joe (which made it two whole weeks in a row, a real record for him lately!), Nathan, Justin, and, The Person Formerly Known As Crappy The Clown, who's name this night was Vilified (he said he was the leader of a group, The Evil Deeds Society.), and he brought Ace Frehley, of the band Kiss with him, Ace remained silent, though, Vilified said he communicated with him telepathically. The band Take Two was there for the first couple hours. They played two sets of three songs each live from The Performance Room, with Nathan running the sound, so they sounded awesome, as he is really good at that. Then the band was interviewed, they told us all about themselves, as this was their first time at LE. Two more tracks from their ten song CD, ones that they hadn't already performed, were played as well. They are very cool, you can find them on Facebook, where you will find all the links to all the other places you can find them. Vilified had a game to play, involving food. He had a bunch of doughnut balls, which he called balls of misfortune, everyone was supposed to eat one, and there would be a fortune in it. For some reason no one really wanted to eat Vilified's balls. I can't imagine why! But Azkath and Just Joe finally did. Azkath's said that he had won five bucks, but Vilified then named three people named Buck, a male deer, and, when asked what about the fifth buck, he replied "Buck off!". Ha, ha. Just Joe's said that he was going to die of a heart attack next May. We certainly hope that isn't true, but, then again, if he does, we will probably have been the ones who caused it, and he has died many, many times here before, and yet, somehow, is still around. Vilified also then made himself a mustache and goatee out of electrical tape and then spoke in a heavy Hispanic accent, sounding like Cheech, from Cheech And Chong. A portion of an interview that Azkath conducted with Chris Mulkey, an actor who has been in over two hundred movies and TV programs, and is one of the stars in the new movie "The Surface" was played, you can hear the rest on our web site. There was a tribute to the bass player from the band Obituary, who had passed away this week, a song from that band was played, and it was noted that there was irony there, playing a song from the band Obituary, because one of their members had died. The Old School Hour was an hour late, 3:00, because Take Two was still performing at 2:00. The cover Set was a little late as well. There were segments of Movie Time...