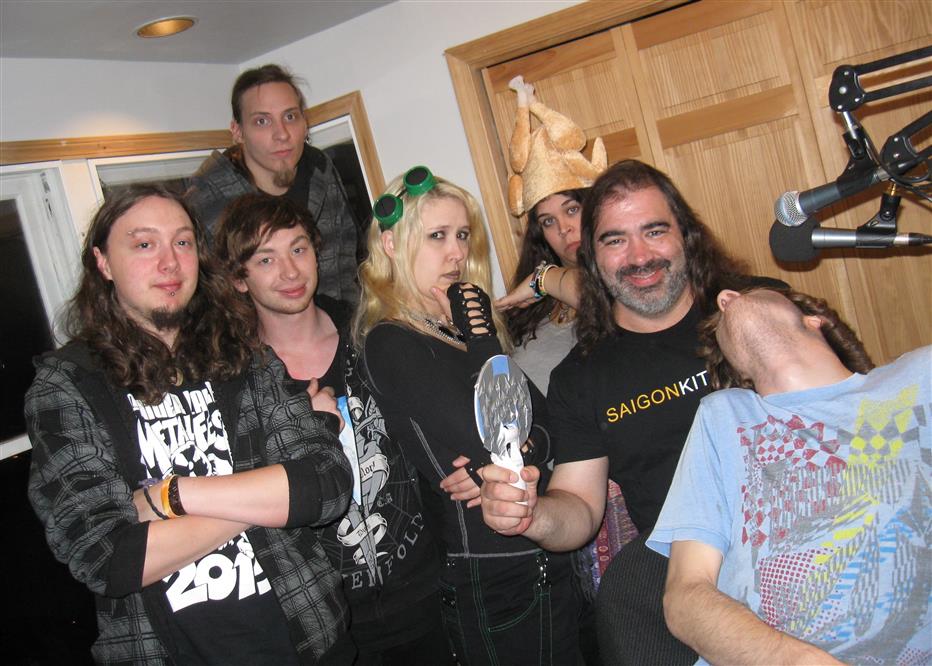 Present were, EVD, Nathan, Justin, The Person Formerly Known As Crappy The Clown (and sometimes still is), this night he was calling himself Confusion, and also still Vilified, like he was last time he was here, and Crappy also put in some appearances tonight, and, the band Undead Messengers, who brought along a new member, Jake, who didn't say much. There was a Russian Roulette Set, if a bullet played, Justin won, if not, Nathan did. The loser would get spanked with a light, soft paddle, and, if a bizarre song played, EVD would get spanked a lot of times with it. Nathan lost, so he got spanked with the paddle, no big deal, right? Except that, he should have known that his punishment would never be that light, not on this program! Azkath conveniently forgot to mention that there were lots of thumb tacks imbedded in the paddle, well, that's such a tiny detail, I'm sure it just slipped his mind, I can see that. Nathan will probably have some trouble sitting for a while. Btw, the bullet was Europe's "The Final Countdown", somehow a copy of it must have survived the virus that Azkath made to destroy every copy of that song, as it is banned from ever playing, in this studio, too bad Just Joe wasn't there to hear it, though it was quite quickly stopped. Everyone was asked a question, "What was something that, when you were a child, you thought was true, which was totally wrong"? EVD, as always, had the most disturbing answer. Crappy played a trivia game, whomever answered some questions correctly got an ice cream sandwich. There was a game played, "My Little Pony, Or Porn Star". Azkath read out names, and everyone had to guess if each one was the name of a My Little Pony, or a porn star, as the name of the game would imply. A lot of the answers were surprising, many of the ones you would think were porn stars, were actually My Little Ponies. And, our resident Bronie did miserably, only getting two out of ten right, he should be ashamed of himself, and should have gotten another whack with that above mentioned paddle. A Punch Drunk Monkeys's song, "Cookin' With Uncle Charlie", was played in honor of "Uncle Charlie", one of their old time drummers's who also played with Dio, who passed away this week. There were segments of Movie Time, some TV programs were talked about as well. At 2:00, The Old School Hour. The Cover Set was a bit late, 5:00, instead of it's usual 4:00...

Elegeion "The Last Moment"
In Slaughter Natives "Ashes of Angels"

Shining "House of Warship"
Cirque Du So What? "Anti-Bullying PSA"
Steel Raiser "Fast as the Light"
Starblind "The Lighthouse"
Shadowkiller "The Blood of Many"