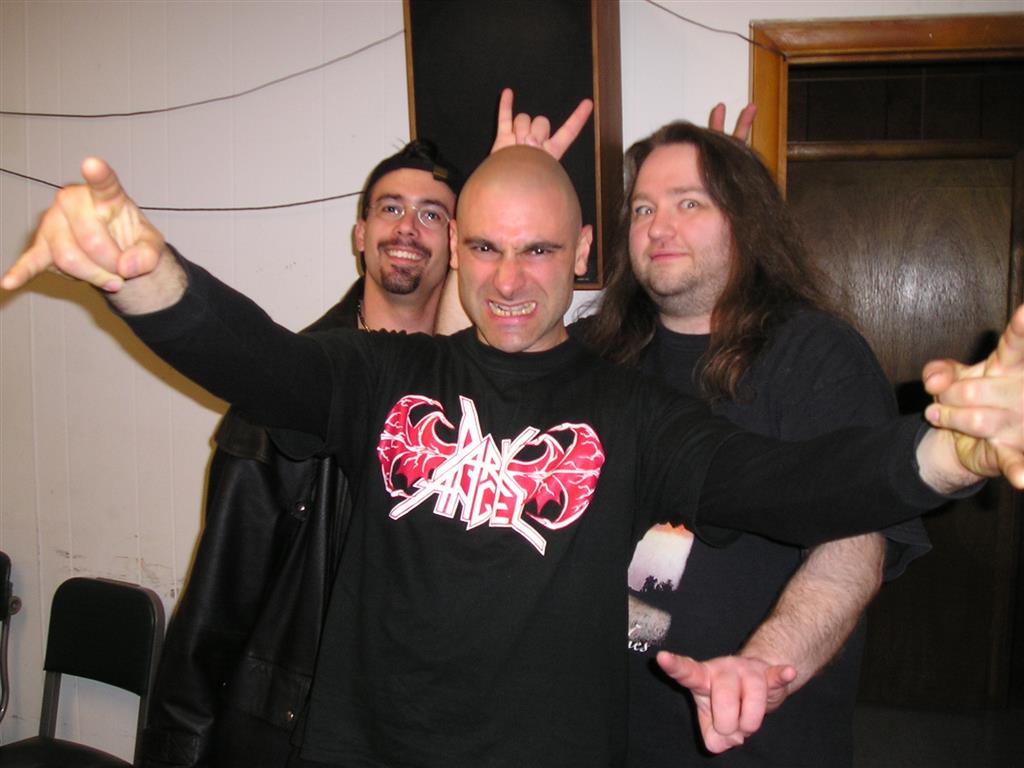 The first hour of the show was prerecorded as everyone was attending The Xtreme Soundscapes Showcase at Castaways. When they returned, around 1:20, they brought with them the vocalist from one of the bands who had just performed at that show. Mem, the vocalist for Sun Descends (also former vocalist for Exumer and Humongous Fungus). He gave a long interview, telling us about his band and his thoughts on the music scene in the past and today. We also got to hear several tracks from the bands CD played. They're cool, and I hope all of you in the area attended the concert at Castaways. After Mem had gone, they asked Just Joe how he was feeling, if he was over his insanity of the previous week, blubbering about an awful sea monster in the basement? Just Joe said that he was fine, absolutely fine, and that he was no longer afraid of the basement, or any monster. They told him that, if that were really true, then of course he would have no trouble proving it by going to the basement... At first he seemed a bit reluctant to do this (they have locked him in once he was there many times, after all). But, they assured him that all would be well, and promised that no one would lock the door on him. Being stupid, Just Joe decided to trust them. He went to the basement... Now, unbeknownst to Just Joe, they had put a big cardboard cutout of an ugly looking monster in the middle of the basement. They waited to see what his reaction would be... After a bit, Just Joe emerged from the basement. At first he seemed pretty much ok, and they congratulated him on overcoming his totally unwarranted, irrational fear of the basement... But then Just Joe started muttering about a monster in the basement. Feigning innocence, they said "what monster??". "there is no monster." At the next talk break, Just Joe had somehow acquired an axe, and declared that he was going to show that monster and take care of it once and for all. And with that, axe in hand, he went charging down to the basement. Then there was a terrific amount of noise. A lot of crashing and banging, and yelling which went on for a long time. They speculated that maybe Just Joe had impaled himself on the ax (that would be a very Just Joe thing to do, after all). But then Just Joe emerged from the basement saying that he had gotten rid of the monster. Oh, and one other minor, insignificant item of note btw, (almost left this out, it's so trivial), he was absolutely covered in blood... Just Joe was bragging about how he had dispatched the monster. He was informed that there had been no monster, that it had been a cardboard monster for a joke on him. At first Just Joe would not accept this, but, as the truth slowly began to sink in, he seemed to become worried for some strange reason, who knows why? He posed the silly question that, if the monster had been cardboard, then where did all the blood he was covered in come from? No one seemed to have an answer for this. Just Joe started muttering some other nonsensical things. Weird stuff like how maybe he shouldn't be there, and something about the cops for some reason. Now why would he mention cops? Can you figure that out? I sure can't. But then, who can ever figure out Just Joe, he's so stupid, nothing he says ever makes sense! Azkath went down to the basement to have a look. When he came back, he reported that, the cardboard monster was gone, that there was a lot of blood... And nothing else... Somehow, the conversation got around to the broken toilet, which had started this whole sea monster business in the first place by flooding the basement. Just Joe was told that it was still broken, and he said not any more, he had fixed it, he had found something to drop down it that stopped up the leak. He then mumbled something that sounded like "human body", but, why on earth would he be saying something like that?? I must've misheard him, he was mumbling and ranting, after all. I can't imagine what he seemed so upset and worried about! Ah well, it's just Just Joe being Just Joe, I guess. He is insane. The sanity test they gave him the week before concluded that he was a maniac, after all, so there you go, and don't forget stupid. So who can figure out what his weird ramblings might mean!?