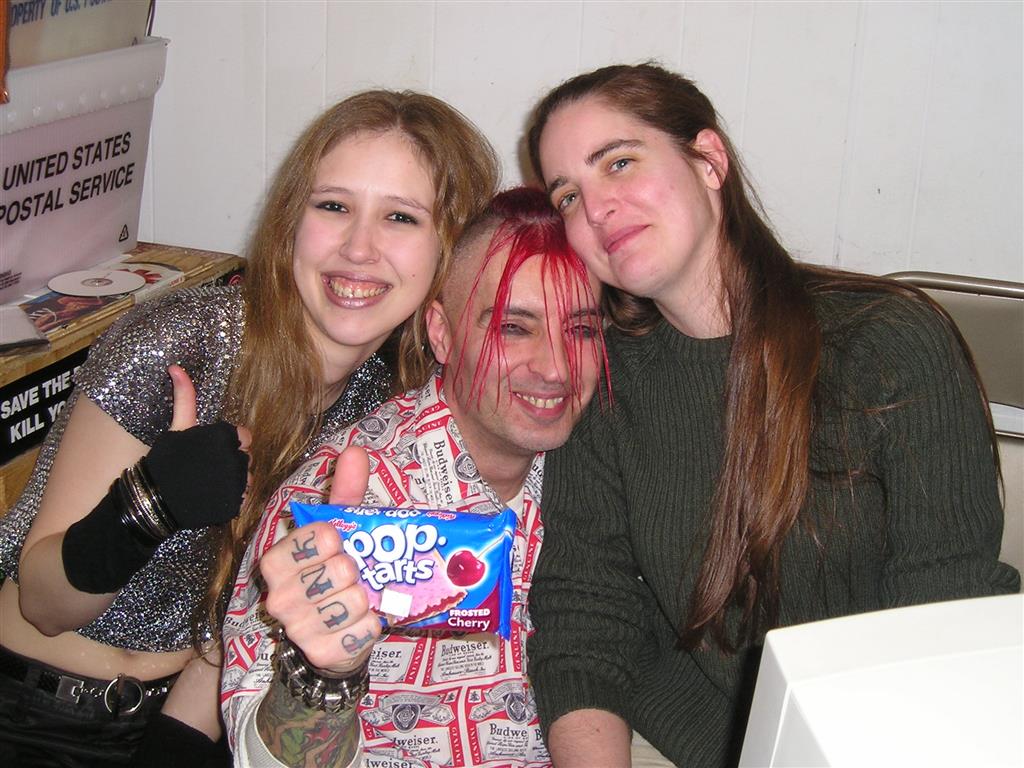 Crow and Ritchie of The Pushrods were both there. So were Ian The Yeti, and The Penguin. The theme of throwing people in the snow continued. The Penguin was being annoying and obnoxious (her usual self, that is), so they had Just Joe force her outside and toss her in the snow (Crow helped). Well, Penguins are at home in and like snow, don't they? While this brawl was going on, The Penguin in her struggles, only managed to wind up in compromising possessions with just Joe. She was extremely traumatized by this (of course she was, who wouldn't be!), and tried to deny that they had ever taken place. (I'm sure there is documentary proof, though, unfortunately for her!) Then Ritchie was trying to perform some songs, and, while he was, someone goosed him and was touching him in other suggestive ways. He thought and hoped it was the Penguin, but then discovered the nightmare truth... It was Just Joe! Oh, the horror! The inhumanity! Ritchie tried to be brave and perform another song, but he just couldn't get through it due to Just Joe's further distractions. So Azkath told Ritchie to just perform some instrumental Just Joe beat down theme music, as he was going to give Just Joe one long severe brutal beating as JJ had been provoking him all night and he had been storing up the beating that was about to take place. Ritchie was only too happy to comply with this. He supplied the musical accompaniment and one terrific prolonged brawl ensued. Just Joe emerged battered but, of course, still alive. No matter how hard they try, he just doesn't have the decency to die and stay dead. Ritchie did manage to perform some songs which were funny as always. The Yeti wanted him to perform the theme to The Love Boat. Ritchie did sing a bit of it, and so now Ritchie is Ian's hero and Ian seems to have appointed himself Ritchie's protector. I'm not so sure if that would be a good thing for Ritchie or not. The band King Snyder were on for an interview. They brought their new CD, and all three tracks from it were played. It sounded great. And they told us about themselves, their music, and upcoming concerts. They have not been on LE for about a year and a half, and it was good to hear from them again.