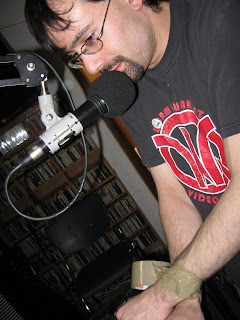 Recap by Fire Eater Wizard; Dave finally was there after a months absence. The last time he'd been there was Easter, when he got nailed to a tree. He said he'd been in the hospital all this time, because he now has a worm, from the tree, growing under his skin, on his face. The hospital finally gave up and released him with the worm still there, saying they didn't know what else to do about It. Dave was quite upset at having a tree worm in his face, although everyone else thought it looked pretty cool, Just Joe said it waved at him. Members of two bands called in and were interviewed. Both were Canadian bands, from different parts of Canada. First a member of Fuck The Facts. Then a member of the band 22nd Century called in. Both bands rock. A feature from years ago was brought back, when Show Listings were read, they had their own background music that used to be played long ago when Handy, The Hand Puppet Of Doom, was there. It hadn't been done since then, and tonight it was. Just Joe liked it. Then the segment that debuted last week occurred, Adventures In Listening, where we all get to experience a set of new music that Azkath hasn't heard yet, so we all get to find out together if it sucks or rules, or is a mixture. Movie Time happened. Because when Just Joe gets excited, like when he's talking about movies, he moves his hands a lot, talking with his hands, it's an Italian thing, being Italian also, I know about these things. So Azkath taped Just Joe's wrists together. He tried to get Just Joe to get excited about describing the movie he talked about, but Just Joe wouldn't, despite a lot of effort from Azkath. Later, after the tape was off, Just Joe reviewed the movie again, and now, with his hands free, he got very animated and excited, and went on, and on, and on, and then on some more, about the movie. Periodically Azkath would hold Just Joe's hands, and then Just Joe would go all monotone and listless in his description, then Azkath would let go and Just Joe would get all revved up again. Adventures In Listening, part two for this night, happened. More Movie Time was interspersed throughout the night...

Pandora's Toybox "A New Sanctuary in the Shadows / Evil and Other Pastimes"
Others "Julie Ann / Murder Squad"
Zadoc... and the Nightmare "Twisted - Live"