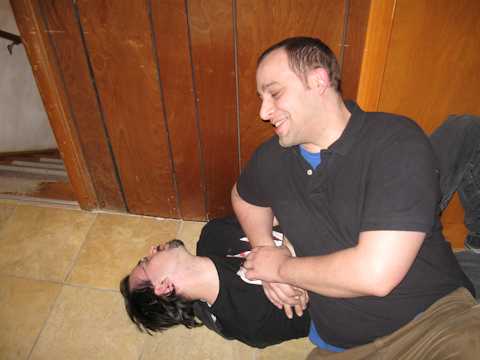 Recap by Fire Eater Wizard; Three of, or parts of three of, the bands who would be performing at the next upcoming The Last Exit For The Lost Presents Show, were either there, or called in and were interviewed on the phone, the only one missing was Chamber Law. The band Others was there. Their new CD was played, and Mark performed two songs acoustically. Just Joe's Hugging Music played, and they got hugged. Two members of the band Gwynbleidd called in and were interviewed for several minutes, and their music was played. And one of the members of Sorrow Of Batavia stopped by for a while. His band's music was played, and he was interviewed. Dustin, of the band Thirteen South, was there for the first talk break. He talked about his band, they would be releasing their first studio CD soon. The Enforcer was back. He had not been seen since he got killed as The Easter Bunny and then could not be resurrected two weeks ago on our Easter, We Love Satan show. EVD had disposed of him in some far away dumpster. But now he was back. Azkath thought he was a zombie, and had Just Joe take the presumed zombie outside, promising it brains. But it turned out The Enforcer was not a Zombie after all. He had no memory of being The Easter Bunny, or of being killed. He said he woke up finally, on a garbage barge, smelling really bad, with a love note from Just Joe in his pocket. No one knew how that happened, as Just Joe had not been there that week, so they concluded that he must have visited Just Joe, why, who knows. Hopefully he won't be like Just Joe and access the footage of his getting killed here, because the memories never came back.

Pics from the Show - Listen to the Show

Others "Incantation / So Comes the Darkness / Stitch"
Barren Earth "The Ritual of Dawn"
Lair of the Minotaur "Riders of the Skullhammer, We Ride the Night"
Hundredth "Desolate"
22nd Century "Let Me Be"

Others Live Acoustic "The Last Man / She Keeps Coming Back"

Sorrowseed "Eldritch Hunger"
Dead Man's Bones "In the Room Where You Sleep"
Poolside at the Flamingo "If You Feel Anything Hit You, It's Just Me Flicking Boogers"
Semargl "Credo Bellictum Satanas"
Cirque du So What "Gilbert's Basket of Shoes"
Mastic Scum "Revelation of Mankind"

Cancer Bats "We Are the Undead"
Rickets "Program the Dead"
Cirque Du So What "The Bible, an Audio Book"
Ambush! "out for Blood"