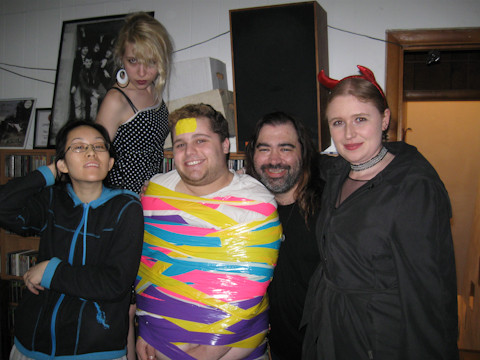 Recap by Fire Eater Wizard; It was Easter Sunday, so it was a We Love Satan Show, of course. And, as Dave's 3rd anniversary of being here had been 3 days prior to this LE, back on April 1st (isn't that just the most appropriate day to have been HIS anniversary?!), it was also a celebration of that. Just Joe boycotted this program, because he somehow figured out, I'm sure some traitor must have told him, he would never be able to remember on his own, that as he plays The Easter Bunny every year, he gets killed and resurrected multiple times. But then again, that's how we got Shane, from one of those killings and resurrections. Azkath also theorized that this may be why Just Joe has that weird terror of jellybeans, because they remind him of Easter, and his many painful deaths then. Well, so with no Just Joe we needed someone to be The Easter Bunny, and The Enforcer volunteered to do it, they put the bunny ears on him and all was good. Azkath bashed The Easter Bunny in the head repeatedly until he was dead. Then they poured water on him, which is always how we do the resurrections. Only it didn't work this time. Apparently Just Joe is the only Easter Bunny we can miraculously resurrect. Ah well, ya win some, ya lose some, easy come, easy go, and all that, farewell, Enforcer! So now there was this big dead rabbit, which EVD was charged with disposing of, in some far away dumpster. Loren, from the band New Animal, suggested via our chat room that Dave should be made to eat six hundred sixty six Skittles, in honor of it being We Love Satan night. Now for most people this would be impossible, and they did not have that many Skittles, so instead they made him eat an entire bag of pop-rock like skittles at once. EVD had brought multiple colored duct tape in lots of pretty Easter-y colors, yellow, pink, purple, blue, and three girls, Foul Mouth Girl, Genevieve, she of the band Psyche Corporation, and, Victoria, all wrapped Dave up in it 'til he was a lovely Easter Egg. Then Azkath took The Boomstick, and cracked the Easter Egg, Dave, and Skittles came out, a lot of Skittles. How very Easter, crack an egg, get candy! Azkath then told Dave that as it was his 3rd Anniversary celebration, he had a gift for him... Spikes. The three girls took Dave outside and crucified him, nailing him to a tree, so Dave got nailed by three girls, if you will. Dave, in his horror of trees, ripped himself free, apparently, because there was lots of wood (well, I guess if a guy's been nailed by three girls at once, there would be a lot of wood, now wouldn't there?!), a lot more Skittles, Victoria was gone, it was not known exactly what had happened to her, she may have just gone home, and it was thought that Dave ate EVD in his terror of the trees. At any rate, Dave, EVD, and, Victoria were all gone, and none of them were heard from any more on this night. Genevieve was there all night, and lots of her songs were played. www.psychecorporation.com and, www.myspace.com/psychecorp are her websites. And, of course, as this was a We Love Satan Show, music for and about Satan was played all night long. No appearance by Satan this year on the program, but he did make an appearance in our chat room... So, once again, Dave, although it was a mixed night for you, on the good side, you ingested a ton of candy, made a lovely Easter egg, and got nailed by three girls at once, on the bad side, well there was the whole tree thing, and I know anything involving trees, for you that's a very bad thing, but, anyways, again, a very Happy 3rd Anniversary to you!