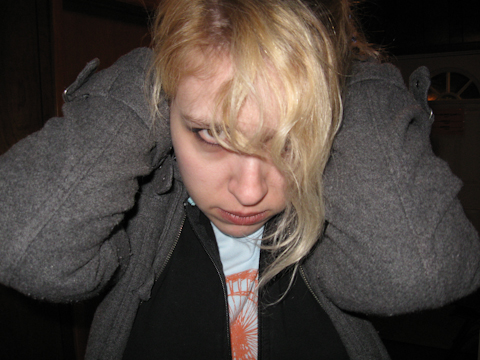 Recap by Fire Eater Wizard; Shane, the man that grew from a spare hand of Just Joe's, was there after not having been for quite a while. EVD was also there, and The Enforcer was there for a little while. For the Russian Roulette set... If no bullet played, Just Joe would get to play a glam set of music, as he was still upset over thinking there would be an hour of glam the week before and falling yet again for that setting the clocks ahead thing which causes that hour not to exist. However, if he got to do that, while his set was playing, if it angered Shane with it's glaminess, Shane could do anything he liked to Just Joe to vent his rage. If a bullet played... In our never ending expansion of cool, fun things you can do with balloons in combination with other objects... If a bullet played, Just Joe would have to hold a balloon in his mouth, and everyone there would get to throw mouse traps at Just Joe's face trying to pop a balloon. No bullet. So Just Joe got his glam set. As a glam girl myself, that was good to hear. However, the glam did indeed make Shane angry, and at the end of the set, oh, what a coincidence(!), he had shoved a balloon in Just Joe's mouth, and threw mouse traps at it 'til it popped, and the others threw mouse traps at him and popped balloons too. There was Movie Time, in four parts. Gorgar was there in the last hour...

Amy Hendrickson and the Prime Directive "The Hydra"