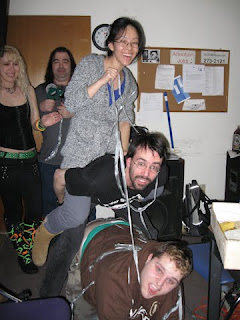 Recap by Fire Eater Wizard; As it had been Foul Mouth Girl's birthday on the Wednesday prior to this LE, it was FMG's Birthday Show. Happy Birthday, FMG! Genevieve, of the band Psyche Corporation, was there, as was Exit, Akiri, Ria, EVD, The Enforcer, TeeJay, James, and Dave, who hadn't been there in quite some time. Genevieve and Dave sang "Happy Birthday To You" to FMG, only they sang it backwards, which was Genevieve's idea. They had debate night, where half the people there would take one side of a question to debate, and the other half would take the other side, with the winning side getting to pick songs. They debated "Did the '80's Suck", and, then they debated "should People who commit Suicide be punished with death?". And this was our annual Glam Hour, where, most years, the hour from 2:00 AM, to 3:00 AM is a solid hour of glam music. Just Joe was sooo excited about this, and couldn't wait for that hour. Unfortunately for him, and the rest of us who love glam music, my self included in those people, this was also the night where we begin Daylight Savings Time, which means that, at 2:00 AM, the clocks move ahead one hour to 3:00 AM, which means, of course, that there is no 2:00 AM hour on this night, which Just Joe forgets, because he is too dumb to remember that cruel joke, and forgets every year. Only two glam songs were played, Cinderella, and Skid Row. Just Joe was all happy and rockin' out, as was I, and then, when they told him it was 3:00 AM and glam hour was over he got all sad, and confused, because he couldn't figure out how a whole hour could have gone by so quickly, he never did figure it out, he never does, next year he'll fall for it all over again...