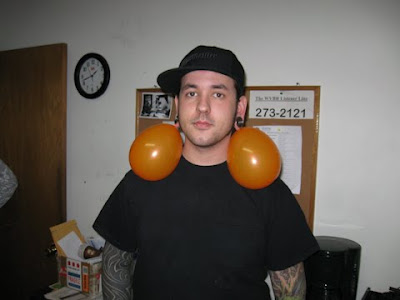 Recap by Fire Eater Wizard; It was a night for, and full of, things that begin with B... Barbed wire, and balloons. The Enforcer for some reason volunteered to be the first victim, err, I mean, contestant, in a brand new game. He wore a barbed wire crown, and everyone else threw balloons at his head, trying to get them to pop on the barbed wire. He wound up covered in broken balloons. Then they had Dustin, of the band Thirteen South, stick balloons up his shirt, and everyone would take turns hugging him, getting the balloons to pop. Because of the results of a Tribute to the Past Russian Roulette set, either Dustin or Tudi were to be thrown in the snow. Azakth tossed the barbed wire to them, and Tudi was the one to catch it. Thus, Dustin was thrown in the show. So Just Joe and Tudi, from the band Chamber Law, who was also a guest, threw him in the snow. However, both Dustin and Tudi (and almost Just Joe, but he managed to avoid it), wound up going in the snow. There was Movie Time, and Book Time, which I really liked, but it's a lot shorter than Movie Time, because Just Joe doesn't read, therefore he can't contribute a lot to something involving reading, only the video game inserts he's read...

And, last week Just Joe had been refusing to come back 'til they got the shoggoth off the roof, so Foul Mouth Girl, playing the part of Just Joe for that night, was given the task of getting the shoggoth off the roof so Just Joe would return. Well, Just Joe was obviously back, but he still wasn't happy... It seems she took the shoggoth off the roof, and, in another round of the game Hide The Shoggoth, she had put it on Just Joe's roof at his home. So now Just Joe said he couldn't go home. So, at the end of the night, he at first said he was going to sleep in the basement, then, wisely, considering all the bad things that have happened to him down there, he decided to go to Dustin's house instead, which, I'm sure, came as a nasty surprise to Dustin when Just Joe showed up there...

Time Lapse footage from the Show