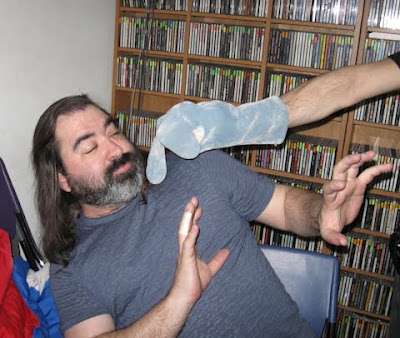 Recap by Fire Eater Wizard; Dave, James, and EVD hosted the first two and a half hours of the program because Azkath, Foul Mouth Girl, and Just Joe were helping the band Psyche Corporation in New Jersey. Dave and James took turns playing sets of music, and a lot of the sets had themes to them like death, and the seven deadly sins. But James played a lot of no nos, like acoustic Jonathan Davis, covering Radio Head's "Creep", no less(!), and rap. He and Dave picked on EVD, for once unnecessarily, as he was pointing out, correctly what a sucky job James was doing programming the music. James clearly needed to be punished, so, when Azkath, Foul Mouth Girl, and, Just Joe returned, Just Joe attacked, molested and kissed James repeatedly. Well, actually, Handy The Hand Puppet Of Doom did the molesting and kissing, as Just Joe was wearing him. James did a lot of screaming like a girl. Handy also kissed EVD. Azkath played an Insane Clown Posse song which was for all of the co-hosts who had hosted the program in his absence, especially for James, and, even though he had picked it, so it wasn't a random occurrence, he still told Handy to throw Just Joe, who was still wearing him, down the stairs. So Just Joe threw himself down the stairs under the control of The Hand Puppet. Then Azkath told Dave he could help to redeem himself if he threw James down the stairs on top of Just Joe and Handy. Dave did, but they got stuck halfway down, so EVD went to help with that. Later, Azkath told Just Joe to take EVD down in the basement, and shave off his beard. Just Joe did, and that was the last we heard of EVD for the night. Just Joe said he had shaved him, and that under it there had been a whole lot of hair, comparing it to that character in Bugs Bunny. Gorgar arrived in the last hour. We were told that Just Joe had saved Gorgar's life last week, when he had been having trouble with the shoggoth on the roof, and Just Joe had kicked the shoggoth and saved his life. But then Azkath said there had been a ton of deer out there, as Gorgar is the God of all deer, that's why they all flock to him and get hit by his car, not because they are trying to kill him, but because they worship him, and it is a great privilege and honor for any deer to die the martyrs death of dying by being struck by their God... Azkath, Just Joe, and, Gorgar told us what movies they'd seen in the past week, and which were good or bad in Movie Time...

The Agonist "Thank You, Pain"
Sorrow of Batavia "Descent, Charred, and Blackened"
LAW "Of Monkeys and Man"