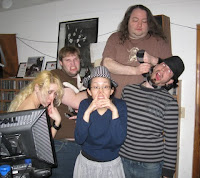 Recap by Fire Eater Wizard;Psyche Chimère, of her band Psyche Corporation, and Ian, of the band A'Rebours were there. They would both be performing at the next The Last Exit For The Lost Presents Show later that Sunday. Lots of both their bands's music was played. They rock. People there were given challenges to complete. Psyche Chimère made up a story about James, about how he was a bear human, a long story. Ian was told to come up with a new religion, and he had to recruit James to it. Anyone else he could convert would be bonus, but the key thing was to recruit James. He invented a religion called the Ambiguoust, it was all very ambiguous. But he did recruit James, so he got to pick a victim for his religion. He picked Foul Mouth Girl, which meant that he got to play balloon golf on her. Azkath told Ian he was going to cause him to lose his new cult. He lured James away from it, and so disbanded it. Just Joe got naked and hugged. Ian got to pick a song from 20 years ago again. Last week he picked Motley Crue's "Girls Girls Girls". He was told not to do that again. He picked Ratt's "Round And Round". Earlier in the night Psyche Chimère read a long poem by the winner of a bad poetry contest. Gorgar was there after many weeks absence, so there was a Gorgar's Glamorama. His pick was new Winger, "Stone Cold Killer", which does not sound like old Winger, in other words, not like a bullet for Russian Roulette, I like it. Of course, I like old Winger, too.

Pictures from the Show

Psyche Corporation "End of Creation"
Rob Balder "RE: Your Brains"
Euphoreador "Retreat Down the Long Haul"
Julian's Lullabye "Sand on your Hands"

Psyche Corporation "End of the World"