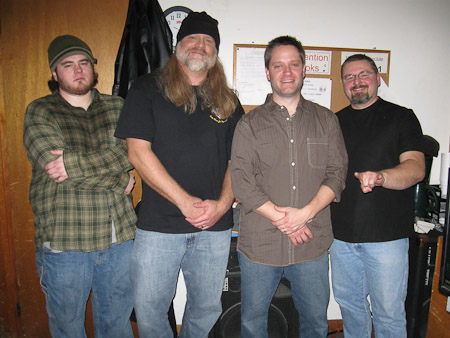 Ire Clad are on the first half of this show...

Ire Clad "Say This Not to Me"

Recap by Fire Eater Wizard;
Just Joe was finally back, after two weeks absence. He said he hadn't been there because he had been on vacation, and then, when he got back, he found a tunnel in his house, the tunnel Azkath had mentioned seeing the week before, when he went to check on Just Joe's house, because he suspected that Kal had super glued his windows and doors, which, someone had, and we suspect it was Kal, no matter how much he denies it. The band Ire Clad was there for about the first three hours. They were interviewed, and they played some songs live and acoustic on the air. Many songs from their CD were played as well. They are cool. They can be found on facebook and twitter. Tim was there. So was Kal, and his friend Shawn. The day before this LE, Saturday, December 10th, had been Kal's birthday, he turned 18, so he is now legal! Happy Birthday, Kal, and congratulations! It was also the birthday of a member of Ire Clad, Eric, so Happy Birthday, Eric! Just Joe Screeched, err, I mean, sang "Happy Birthday To You", with the band joining in. Azkath told Just Joe to go find something to give Kal his birthday spankings with. Just Joe came back with a cookie sheet. Azkath told Just Joe to hit Kal in the head with it. Just Joe gave Kal two shots to the head with it, then gave him his birthday spankings with it, then some more shots to the head. Now, Tim likes a lot of things that put his manhood in serious question, he LOVES the TV show "Dawson's Creek", loves the TV show, and the movie, "Glee", and has a lot of music on his MP3 player that men just shouldn't like, especially not a man on a metal show. And now, Tim kept his manhood in question by saying that the new "Twilight" movie had been really good. Azkath told Just Joe to hit Tim with the cookie sheet. Which Just Joe did. Then, later, everyone got hit with the cookie sheet. Azkath told Just Joe to hit Kal with it, to remember that Kal had stolen all his buttons a few weeks back, and that now he had super glued his house, and dug a tunnel there. Kal started fighting back, and he and Just Joe wound up on the floor together, hitting each other with the cookie sheet. During this struggle, Kal wound up with Just Joe's ass on his face. Tim got hit with the cookie sheet. He took it, and used it as a shield, then said he would hang onto it. Azkath got it back from him, and hit Kal, and Just Joe with it. Quite a lot. There was a segment of Movie Time, with Kal, and Tim participating. Tim did actually have another movie to talk about besides "Twilight". And, Just Joe, after three weeks away, did finally have some movies to talk about, despite having spent that time on vacation, and having all those problems at his house. The last hour was The Rare Obscure And Classic Music Hour.