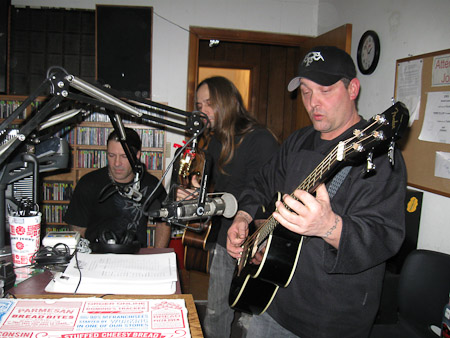 Stone Soul Foundation are on the first half of the show, being interviewed and playing some live acoustic songs...

Ire Clad "In Your Face"
Midas Fate "History Repeats Itself"
Redemption "Blink of an Eye"
Drop Head "What Am I Doing Here?"
Gypsyhawk "Planet Former"
One Eyed Doll "Murder Suicide"

Recap by Fire Eater Wizard
The band Stone Soul Foundation was there for about the first half of the program. They were interviewed, told us about themselves. They played a couple songs live and acoustic on the air, and lots of their music was played from CD as well. They are awesome, www.stonesoulfoundation.com is their website. Just Joe was not there, and no one knew where he was, no one had heard from, or was able to get in touch with him. Kal was there. Azkath asked Kal if he had had anything to do with Just Joe's mysterious absence? Kal said he had done nothing to Just Joe, or, at least he was pretty sure he hadn't. He did mention that he had heard of this guy who had been going around super gluing people's windows and doors shut so they couldn't get out of their houses. He speculated that perhaps something like that had happened to Just Joe. Azkath asked him if HE had done that to Just Joe, Kal said he was pretty sure he had not. Azkath decided to call Just Joe, on the air, to see if he could reach him, and maybe get to the bottom of this... When he called Just Joe's cell phone, it rang, on Kal! Kal obviously had Just Joe's cell phone in his possession! Kal immediately said that he had to go, and ran out. Azkath chased after him to make him explain himself, and what he had done to Just Joe, but Kal escaped. Since Azkath had the rest of the show to run, he couldn't follow Kal any further, but he did say that, after the show, he was going to check on Just Joe's house and see if he was super glued in there. BAD BAD KAL!! There was one segment of Movie Time, with Kal participating in it before he got caught and ran off. Just Joe probably hadn't seen any movies to contribute anyways. Maybe, with two weeks time, and a lot of that time probably having been spent super glued into his house, thanks to Kal, he will have been watching some, after all, if you can't leave your house, you will have a lot of time to fill. The last hour of the program was The Rare Obscure And Classic Music Hour...