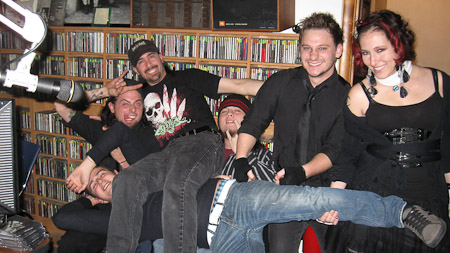 Just a Memory were there for the first 2 hours, and were interviewed and played some live acoustic material.


Just a Memory "No Turning Back - Acoustic Live"

Just a Memory "I Hate You - Live Acoustic"

Edge of Paradise "Mask" (R)
Arryan Path "77 Days Till Doomsday"
Sober Truth "Leave Me Alone"
Sick of It All "Sanctuary"
Cirque Du So What? "My Chinese, Me Play Joke"

Nemesea "Afterlife"
Skinny Puppy "Gambatte"
Hundredth "Carry On"
Amon Amarth "...and Soon the World Will Cease to Be" (R)

Recap by Fire Eater Wizard;
The band Just A Memory was there for the first couple hours. They were interviewed, and they played some of their songs live and acoustic on the air. Tracks from their EP were played as well. They are a cool band, www.facebook.com/justamemorymusic is the website where they can be found. There were four segments of Movie Time, Just Joe really sucks and had seen no movies this week, not even any kid ones that he watched with his spawn. He is still working his way through the television series "Lost". So Azkath had to do Movie Time by himself, spacing his four movies out, one at a time, throughout the night. The last hour was The Rare Obscure And Classic Music Hour...