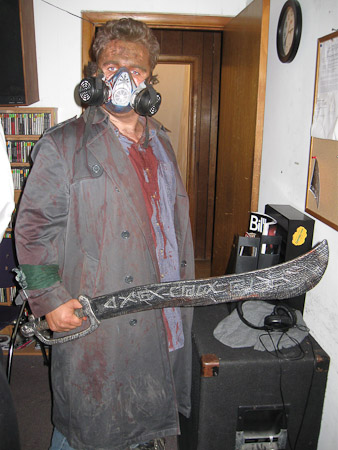 The Commander-in-Chief interview is at 2am, File 3.

Mercia "March of the Dinosaurs"

Recap by Fire Eater Wizard;
Halloween fell on Monday, the day after this LE, so it was a pseudo Halloween program. There was lots of Halloween themed music played, comedy songs, and lots of metal about Halloween, or subjects that go with Halloween. Rick and Kal were there. They both scared Just Joe when they arrived, which is understandable with Rick, but with Kal? Really Just Joe! Just Joe said Kal had screamed when he arrived, and that had scared him. So he hid under the table. Again, Really, Just Joe? There was a Halloween contest. Azkath would ask them each questions, and the one who answered the fewest right, would be the loser, and would have to endure something scary. Kal lost the first round, so he got put on the barbed wire board, and stepped on and jumped on, just to make it extra scary. And probably the most scary part of all, Just Joe's butt fell on top of him! Just Joe lost a round, so he was put in a cabinet full of spiders for an entire set of music. He was quite traumatized by that. Rick's scary thing would have been to be forced to listen to Justin Beeber, Niel Diamond, and, the worst horror of all, Metallica with Lou Reed, for an entire set of music, but Rick didn't lose a round, so he never had to have a scary event. The Commander In Chief called in at 2:00 for an extended interview, book ended by two of her songs. She is a very cool musician, www.thecommanderinchief.net is her website, and she is also on facebook, youtube, and twitter. There were two segments of Movie Time, Just Joe had actually seen a couple movies this week, and Rick participated in one segment, as did Mark Anbinder, a long time WVBR personality. Someone was there in the last hour who had not been there in a very long while. No, once again, if you said Dave, you would be wrong, he is still living up to his very well deserved title of worst co-host in the world, and was yet again not there. It was Gorgar! Just Joe was so excited to see Gorgar that he screamed out his greeting very loudly, and very long. It had been Gorgar's birthday that past Tuesday, October 25th, Happy Birthday, Gorgar! Just Joe screeched, err, I mean, sang a little bit of "Happy Birthday To You" to him, before Gorgar said that was enough of the song. Just Joe said he had a birthday present for Gorgar. He stripped down. His present to Gorgar was that he had on Iron Man underwear, he told Gorgar he had gotten him Iron Man. Gorgar, for some reason, didn't seem too thrilled with his gift, and told Just Joe to get away from him, and to pull his pants up! There is just no pleasing some people!