Menu
Listen to the Show - Pictures

The first two hours, Keith of Drop Head joins us to discuss and play music from his band. At 2am, file 3, Andrew from Eyes on Infinity calls in to talk about his new Orchestrated project... 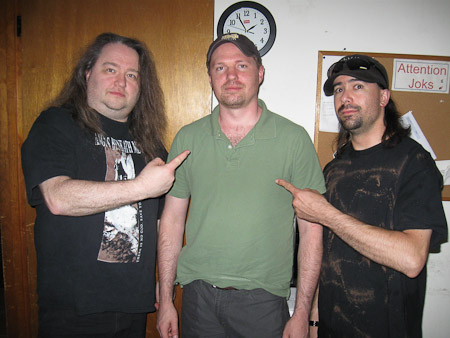 Diablo Swing Orchestra "New World Widows"
The Clan Destined "T.C. Lethbridge"
The One Through Tens "Fighting for a Golden Age"
Amelia is Dead "When the Leaves Fall in Line"

Drop head "What Am I Doing Here?"
Eternity "Sleepwalk"
Liquid Me "Suffocation"

By Fire Eater Wizard;
One member of the band Drop Head, Keith, was there for the first two hours. He was interviewed, and several tracks from his band's CD were played. They rock, www.drop-head.com is their website, and you can also check them out on facebook. He was asked, and gave his answers to, a bunch of those wacky questions from theinsanedomain.com something that hasn't been done in quite a while. He also was treated to the great joy and pleasure of having Just Joe sit on his lap.

At 2:00 Andrew, from the band Eyes On Infinity, phoned in for an extensive interview, book ended by tracks from his band. They are very cool. Andrew told us how he is also doing orchestral, and chamber ensemble versions of his band's work. He has a website where he is trying to raise the funds to help with that, www.indiegogo.com/Rock-Band-Concerto is where you can help with that, and it is very cool, so, if you can at all spare a few bucks, every and any little bit can help, it is a very worthy project. He is also a classical composer. A clip of one of his band's songs done as the orchestra version was played. He is on facebook, and he has his own website, www.andrewrosciszewski.com

Someone who hasn't been here in quite a while, like three or four months, was there in the last two hours. No, once again, it was not Dave, although, as he is the worst co-host in the world, again, that would be a very good guess. But, no, it was Gorgar. There were two segments of Movie Time, with Gorgar participating in the second one. The last hour was not exactly The Rare Obscure And Classic Music Hour, the first half was newer stuff, but about the last half was old school and rarer music...