Jayne Dracula are in studio for the first couple of hours.
Circus of Dead Squirrels call in at 2am for an interesting interview... 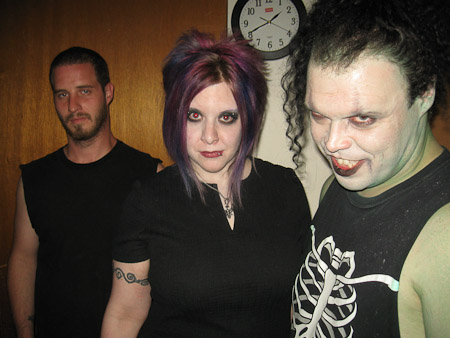 Playlist;
The Clan Destined "Swinging Like Judas"
Hell "Blasphemy and the Master"
Satan's Host "Shades of the Unlight"

Recap by Fire Eater Wizard; Three fifths of the band Jane Dracula were there in the beginning portion of the program. They promoted their band's participation in the Women's Right To Rock Festival, which was the following weekend. All three tracks from their demo were played. they are cool, you can find them on facebook. Matt, the vocalist for the band Circus Of Dead Squirrels, called in shortly after 2:00 for an extended interview, followed by a track from his band's CD. They rock, www.circusofdeadsquirrels.net is their website. Rick, from The Metallic Onslaught, was there for the entire program. EVD and Kal were there for about the first half. EVD and Kal had been among the people who had left a few weeks ago, to find the aliens that Just Joe had kept insisting he saw, and then none of them had come back. Kal had claimed to have awakened at home, naked, with no memory of how that had happened. Other people had claimed that the same thing had happened to them. Then, last week, Just Joe had admitted that it had all been a hoax, to trick Azkath, because Azkath had said he was dumb. EVD had not been back since that night, so now Azkath asked if he had awakened at home naked, too. EVD said he had not, and claimed he had never said that he would be back that night, just that he would be back eventually, which was now. Azkath said that he had said "unlike everyone else, I'll be back", which meant that night, but EVD insisted he hadn't meant that, and that he had just gone home. There were three segments of Movie Time, with Rick and Kal contributing to some of them. And, no kid's ones from Just Joe this time. The last hour was The Rare Obscure And Classic Music Hour.