Menu
Listen to the Show
Pictures 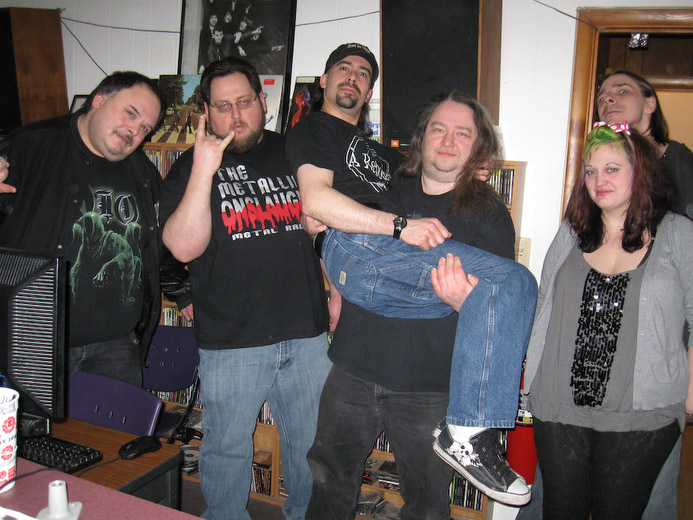 The band Hangman's Heart was there for about the first couple hours of the program. They were interviewed, and they performed a couple of their songs live and acoustic. Tracks from their CD were played as well. Rick, Randy, and, BBBIIIIILLLLL!!!!, all from The Metallic Onslaught, were there. EVD was there, but, as he was there when the band was, and had left by the time the band had gone, he never said anything. This LE was one hour shorter than always, five hours instead of six, because it was the night that happens once every year, the night when we go back on Daylight Savings Time, when, at 2:00 A.M., we move ahead and it becomes 3:00 A.M.. Anyways, on this night, of course, every year, we pay tribute to glam, for the whole hour from 2:00 A.M. to 3:00 A.M., it is nothing but glam. Just Joe always gets soooo excited on this night, because he forgets every single year, that there is no 2:00 A.M. to 3:00 A.M., and thinks he's actually going to get to hear an entire hour of glam. So they told him to pick his first glam song. He picked White Lion's "When The Children Cry", of all things! Now, I love glam too, but let me just say that I am very disappointed in Just Joe here. While that song is pretty good, there are a lot of much better songs to pick from, even from White Lion, I personally would have gone with "Little Fighter", if I were going to pick something from them. After that was over, they showed Just Joe that it was already after 3:00 A.M., and that glam time was now over. Just Joe, as always, like every year, was extremely disappointed, and just couldn't figure out where his hour had gone, and why there was no more time for glam. And, next year, he'll be utterly disappointed all over again. Everyone else was quite sickened by having to endure "When The Children Cry". LE brought you a public service announcement this night, everyone acted out a part in a script on how you can be the first to be eaten when The Great Old Ones, chief among them The Great Cthulhu, awaken from their slumber beneath the ocean, and retake their place as ruler's of the world once again. You will of course want to be among the first to be eaten when this occurs, because, otherwise you will have to witness all the unspeakable horror that will ensue, much better to just be eaten right away, and get it over with quickly, probably extremely painfully but quickly at least, then to stick around longer and experience all the tortures and torments and unnameable things you will endure from the Shoggoths, and The Great Old Ones. And, we showed you how to do that, or if you are not eaten right away, you won't care anymore, because you will have gone completely insane, and will no longer be yourself, permanently and irretrievably. We showed you how to accomplish this when the time comes, which you would be extremely grateful for when it happens. That is, you would be extremely grateful, except you won't be then, because, thanks to us, you'll either have been eaten, or you'll be hopelessly insane. Either way, you won't be feeling anything at all. So you can thank us now for providing you this very important public service so you'll know what to do when the time comes. You're very welcome! Everyone took a part in the script, that is, except for Just Joe, who was supposed to provide the sound effects, but didn't participate at all, because he was too traumatized by all that talk of Shoggoths, and Great Old Ones, since he's seen them numerous times, when he was hypnotized and sent into the future. He went into a long, loud, rant about how the Shoggoth they had put on his roof kept stealing his pots and pans, when he was making grilled cheese sandwiches and tomato soup in them, and wearing them as hats. He later told us that the Shoggoth is finally off his roof, that all the snow froze it to the roof, and then all the rain melted that and washed the Shoggoth away. There were three segments of Movie Time, none of which Just Joe could contribute much to yet again, as he still has not been able to pay his cable bill, and has no TV, which makes it much harder for him to watch anything.

Grave Digger "Rebellion"
One Eyed Doll "Battle On!"
MiRAMAR "We are the Future"

Hangman's Heart "Will It Bleed?"
Protest the Hero "Tapestry" (R)
Jag Panzer "The Setting of the Sun"
Blaspherian "Sworn to Death and Evil"
Benediction "Wrong Side of the Grave" (R)

White Lion "When the Children Cry"

G.B.H. "Am I Dead Yet?" (R)
The Exploited "Politicians" (R)
Circle Jerks "Beat Me Senseless"
The Dead Boys "Sonic Reducer"
Bad Religion "American Jesus" (R)
The Accused "War=Death '88 (and Beyond)"