Menu
Pictures
Listen to the Show - Playlist Below 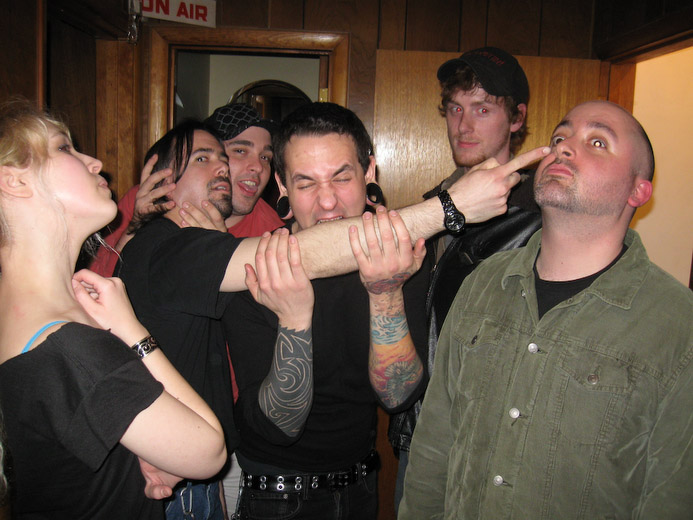 Recap by Fire Eater Wizard; The band Royal Dano was there for about almost half the program. They were interviewed, told us about themselves, and performed several songs live and acoustic. They rock. Tracks of theirs were played from CD as well. Also there was Dustin, from the band Sorrow Of Batavia. Dave was there, which is truly amazing, because this made it three or four weeks in a row! Shane was also there. And Dave had gone to Virginia, and retrieved Just Joe from where Kal had mailed him to the week before. Yes, Dave had returned with Just Joe, just as he had promised he would. Just Joe said they had a great time in Virginia, though, hanging out at the beach in their speedos. I'll bet the people of Virginia are SOOOO happy they are gone! After the band left, Tribute to the Past / Russian Roulette was played. If a bullet played, Shane would get to have a computer keyboard smashed over his head. If no bullet, then Just Joe would get to receive that honor. And, if an EVD song played, I.E., Shatner or Nimoy, or some other bizarre music like that played, which means EVD takes the penalty then, well, since EVD had left by then, Dustin would take it. Bullet. Shane got the laptop keyboard bashed repeatedly over his head by Just Joe, till all the keys were off of it, and it was all misshapen. Then Azkath took it and hit Shane some more with it, and then he hit other people as well. There were several Movie Times throughout the night, with Dave and Shane participating in some of them. Just Joe is still quite limited in this now, as he has been unable to pay his cable bill, it was turned off, and, now that has kinda cut down on his movie viewing. There was a whole lot of great new music this week, so the last hour, which has recently been all old music, soon to have a new title of it's own, was forgone this week, to play more of all that new stuff, plus the host wasn't feeling in an old school mood this night, and, since he's the host, he gets to decide these things...

Sorrowseed "Seeding Dirge / Cancer of Blades"
Mongrel "Shut Up, Get Dead"
The One Through Tens "Fighting for a Golden Age"
Symbol Six "Death Seed"
Kvelertak "Blodtorst"

Royal Dano "Nothing Left to Relate"
Lou Siffer and the Howling Demons "Killing is Fun"
Benedictum "At the Gates"
Kampfar "Huldreland"
Lemmy, Ozzy, and Slash "I Ain't A Nice Guy Afterall" (R)