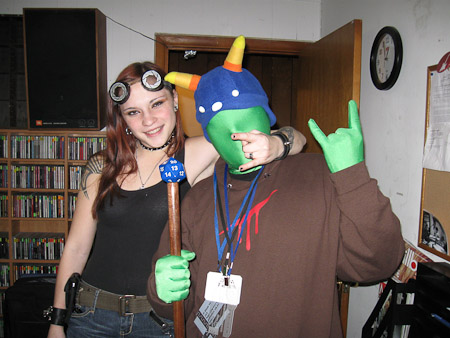 Shining "The Madness and the Damage Done"
Pharoah "The Spider's Thread"
I Exist "Black Unicorn"
Alcest "Autre Temps"
Aborted "Our Father, Who Art of Feces" (R)

Recap by Fire Eater Wizard
Kal was there. He said he would have been there last week, but someone had stolen the fly wheel out of his car so it wouldn't work. Kal blamed Just Joe for this. Just Joe denied it, but he acted really suspicious, and his protests were not very believable. Azkath gave Just Joe a Joe Challenge. He had to try to get the girl Kal had brought with him into the basement. Just Joe did it easily by saying there was candy in the basement. Turns out, there really was candy in the basement, Just Joe came back extremely hyper active from eating all the candy. Later, Azkath played the music that makes Just Joe think that he's a porn star whenever he hears it. When it stops playing, he snaps out of it, and doesn't remember why he is naked, or why he is molesting people. Kal was dancing to the porn music, too, and was getting waaaay too into it, and he was never hypnotized to do so, so he has no excuse. Kal, you were enjoying, um, getting friendly with a naked Just Joe waaaay too much! What the hell is wrong with you!!?? Just Joe later said that strange things had been happening to him, he said someone kept gluing things to his ceiling, different stuff every day. He blamed Kal for this, seeing as how Kal had once glued all his windows and doors shut. Kal denied this, just as he had denied the doors and windows thing, but his protests don't sound very sincere either, and are not very convincing. There was a segment of Movie Time. Just Joe had actually seen a movie to contribute, but Kal had seen nothing. Why not, Kal, after all, you were stuck at home with a non functioning car, you should have had lots of time to watch movies. Probably he was busy gluing stuff to Just Joe's ceiling. The last hour was The Rare Obscure And Classic Music Hour...