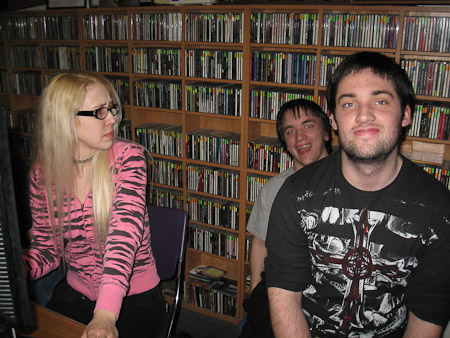 Ritual "Drowning in the Sea"
Spellblast "In the Name of Odin"
The Kandidate "Beyond the Mind, Sleep You'll Find"
Ozzy Osbourne "Diary of a Madman" (R)

Recap by Fire Eater Wizard
Tim was there, as was Rick from The Metallic Onslaught, Adam, Nikki, and Kyle. Adam got repeatedly hit in the face with a cookie sheet by Nikki, 'til he was totally down and out, and seeing stars, lots and lots of stars. There were three segments of Movie Time, with everyone participating in various ones. There were some discussions of the paranormal, along with some good suggestions to be checked out if you are interested in it. Azkath had a ton of new music, so much he didn't think he could fit it all in in one show, even a six hour one, so a lot of very cool new music was played. The last hour was The Rare Obscure And Classic Music Hour, and, for that, Azkath had some really cool, hard to find selections... Also, last week, Lance had been severely traumatized by having Just Joe's scrotum in his face. Then Tim, but not girlie Tim, manly, angry, Jerk Tim had taken him home, as they had driven there together. Tim had said he was going to do more things to please Satan, angry Tim had been brought out because he had also been humped by Just Joe, although Lance had definitely gotten the worst of that experience! Tim had called in again, just like when he had left on Christmas, also saying he was going to please Satan, cackling maniacally, and Lance was screaming for help. Lance was not there tonight, but Azkath said he had spoken with him... He said Lance said Tim had been driving at like a hundred and ten miles an hour, that he was not only texting on his own phone while he was doing that, but that he also grabbed Lance's phone to call in on, so he was on two phones, he was throwing stuff left and right out of the car, and he was trying to throw Lance out of the car. So poor Lance had a really horrible night that night, first getting tea bagged by Just Joe, which is bad enough to scar one for life all on it's own, and then enduring the ride home from hell with angry Tim. When Tim is his girlie self, like he was tonight, he doesn't remember the stuff he does when he is angry Tim. He said he thought he might have possibly been going just a tad, like maybe two miles, if even that over the speed limit, and he speculated that perhaps Lance was only traumatized because of what had happened to him before they left, the Just Joe thing. So Tim is like our version of The Incredible Hulk... Don't make him angry, you wouldn't like him when he's angry!