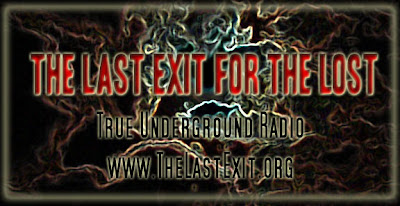 Recap by Fire Eater Wizard
Present were, Adam and Nikki, Kyle, Just Joe, Rick, from The Metallic Onslaught, Tim, and, Eric, the bass player for the band Ire Clad. This was the first time Just Joe had been back since Satan had brought him back from the dead. He had passed out earlier in the week, and Azkath asked him if he was sure that that blackout had not been caused by being sick, like Just Joe thought, but was because he was possessed? Just Joe didn't think so, but Azkath persisted in the theory. A game of Russian Roulette was played. If a bullet played, then everyone in the room would have to say something nice about Kyle. If no bullet, then Rick would get to chop Adam, and Eric, who volunteered, because he wanted to be chopped, we have already determined that Eric is already undead, and pretty much indestructible. A cover of The Pointer Sisters's "I'm So Excited", definitely a bullet. It was really hard, but everyone in the room finally did come up with a compliment for Kyle. Eventually, kind of. Just Joe told Adam and Nikki that he had something to show them outside. After a while, he came back, but they did not. They asked him where they were? He didn't seem to remember what had happened outside. They told him they were going to check the trunk of his car. Later, they asked him why he had locked them in the trunk of his car. He claimed he had done no such thing. Azkath took this as further proof of possession. And, indeed, throughout the night, Just Joe did seem to be losing time, and would spend quantities of time just staring blankly off into space, and then not remember doing that, and not being aware that time had passed. Azkath said he was pretty sure now that Satan had done something to Just Joe when he brought him back from the dead. Just Joe was still confused at the end of the night, not believing that six hours could have passed so quickly. There were discussions throughout the night, on out of the mainstream stuff, like Alex Jones, an out of the mainstream talk show host, and things the government is probably lying about and/or hiding, and Creationism and Evolution. Azkath also had a very exciting announcement... In two weeks, in the hour before LE, he will be hosting another show entitled "Where Did The Road Go?", it will be an interview show where he will have guests on to talk about paranormal and out of the mainstream topics, or out of the mainstream alternative takes and looks at things like Science and history, and ancient civilizations. Very exciting! There were segments of Movie Time. The last hour was The Old School Hour..