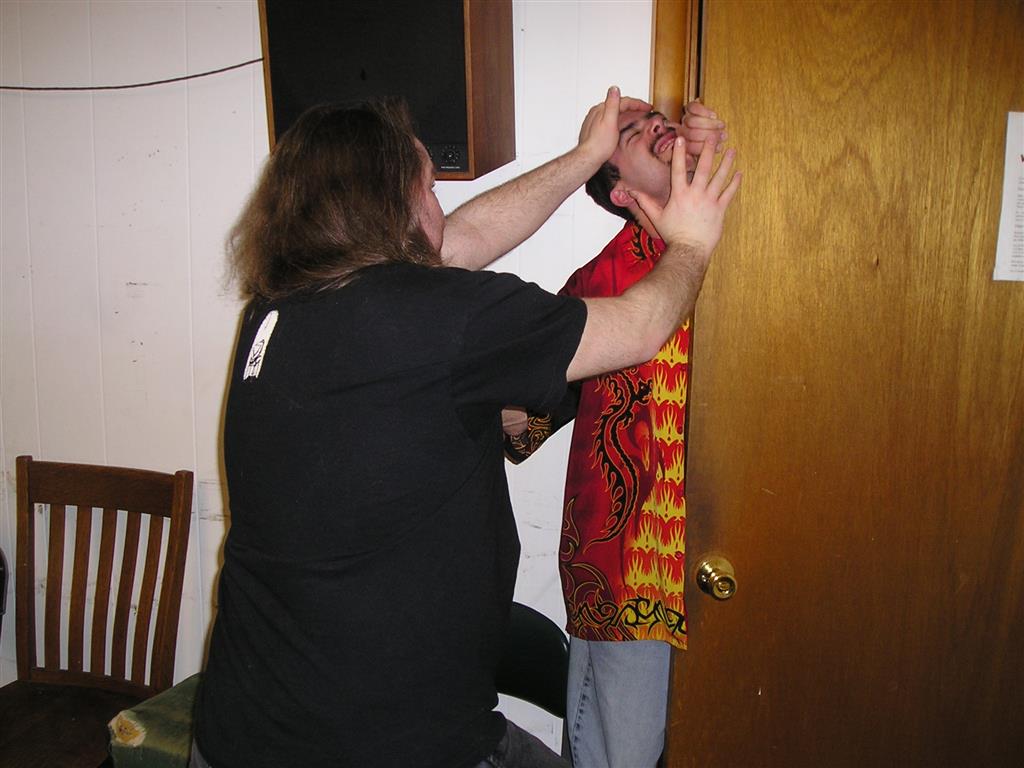 Just Joe was there. A listener who was in the chatroom (EVD)  kept requesting that they kill Joe. Strongly requesting this. After a while, Just Joe said that he had had it with people demanding that he be killed. He said, that, if they wanted it done so badly, then why didn't they come down there and do it themselves?? But nooo! So he said that, if they weren't going to do that, then he was going to go to them. He stormed out slamming the door violently on his way out. They told EVD that Just Joe was on his way to his house. A short time later, Just Joe was back claiming that he had found this person, given him the beating of his life, and left him crying and lying in a pool of his own blood. However, EVD was still in the chatroom, and was fine. They told Just Joe that he must've beaten the crap out of the wrong guy.

For Just Joe's challenge for that week... He had to face Azkath for two minutes in a shoot fight. Azkath had two minutes to make Just Joe either submit or tap out. And so, with an instrumental track playing as a backdrop for this, the fight began... Azkath gave Just Joe a brutal beating, bouncing his head off of everything in the room. But Just Joe was stubbornly hanging in there. So Azkath got a screw driver. They started battling for control of the screw driver, and Just Joe managed to get it away from Azkath, and to stab Azkath in the back with it. The Two minutes elapsed, and Just Joe did not submit or tap out. So Just Joe won what was probably his hardest challenge thus far (well except for the only one he's lost so far, getting a glass of water tossed in his face by Crow). For his reward for winning his challenge, Just Joe got to pick a song to play (he chose "Amerika" by Rammstein). Just Joe was quite battered from the beating he had taken, was having quite a bit of trouble getting up, and then stabbed himself with the screw driver (that's 'cause he's stupid). Just Joe was really bragging and gloating about his triumph (ha! a good Just Joe pun there, not one of his favorite bands Triumph, but his win). Azkath told Just Joe that he was going to spend his week plotting something terrible for just Joe for his revenge. Just Joe kept taunting Azkath, and Azkath attacked Just Joe, giving him another severe beat down. The show ended in a may lay... The Penguin (who got there late, just in time for the last break) and Just Joe were causing more chaos...

Bruce Dickinson "Mars Within / Abduction"
Mercenary "Sharpen the Edges"
Bloodsimple "What If I Lost It"
Wednesday 13 "A Bullet Named Christ"
Impelliteri "Judgement Day"
If Man is Five "Puppetmaster"
Others "I, Vampire"
Overkill "Love"
Worm Quartet / Sudden Death "Inner Voice"
Judas Priest "Worth Fighting For"
XP8 "Our Scars"
Dark Moor "Beyond the Sea"
Korpiklanni "Hunting Song"
Midnattsol "Lament"
Kinrick "The Empire Falls Again"
Green Carnation "Just When You Think It's Safe"
Bleed the Sky "Paradigm in Entropy"
All Shall Perish "For Far Too Long,,,"
Exodus "Sealed with a Fist" (R)
Still Remains "The Worst Is Yet to Come"
Russell Allen's Atomic Soul "Seasons of Insanity"
Sinia Beach "Hell Blaze"

** MYSPACE PIC OF THE NIGHT **
dormitoryeffect "Bide My Time"