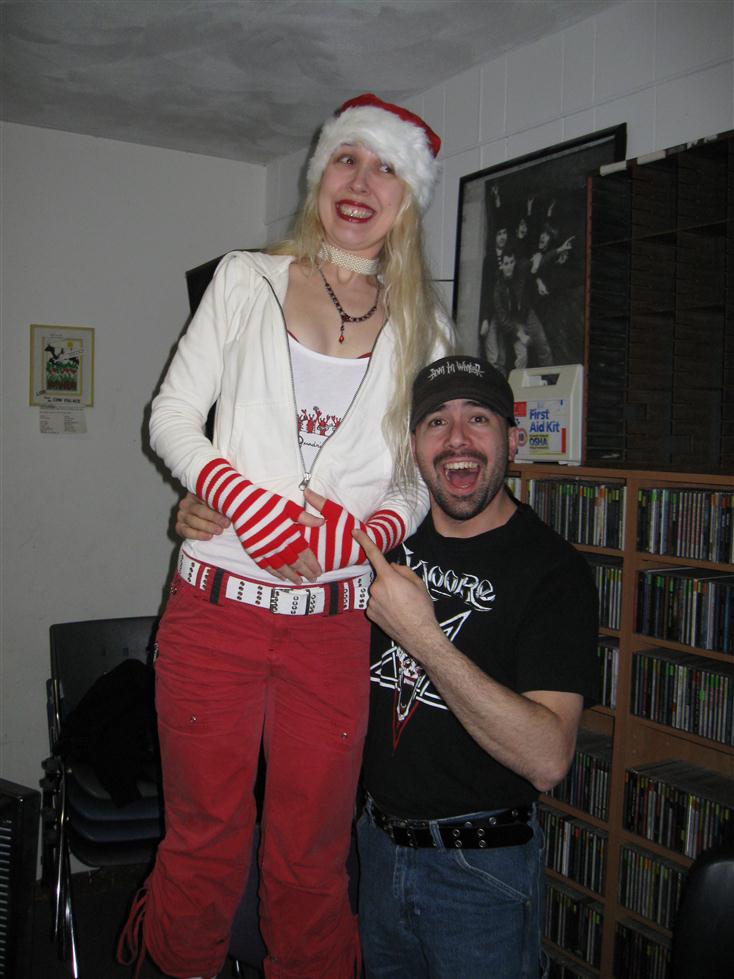 Recap by Fire Eater Wizard
Something happened which only occurs every five or six years, December 25th fell on a Sunday, which means, of course, that this LE fell on Christmas Day, with both LE And Christmas beginning at midnight. Now this usually always means that it is a We Love Satan Show, but Just Joe insisted this time that it should be a show celebrating Christmas and all the things that that entailed, Christmas trees, Reindeer, Santa Claus, and, Jesus's birthday. Azkath said he would try, and did play a metal Christmas song. Tim arrived. Last week, they had tried to make Tim into a man, because he loves way too many girlie things to be on a metal show. But, when Tim becomes more manly, he also becomes a jerk, and this week he seemed broken, sometimes being obnoxious, and then talking about how much he loves romantic comedies, and Janet Jackson music. Tim didn't like Just Joe's insistence on a Christmas show, saying it should be a Satan show. Azkath kept playing songs about and to Satan, upsetting Just Joe. Azkath said he was sure he was getting confused, mixing up Satan and Santa, hey, they do have all the same letters. Azkath, Just Joe, and, Tim began talking about, and comparing, all the things they had done for Satan this past year. Tim couldn't seem to remember doing much, and raced out, saying he was going to do something for Satan right now. A while later he called in, but it was the oddest call anyone had ever heard from Tim. He said nothing intelligible, but seemed to be laughing maniacally, then possibly crying, or screaming, or growling. He sounded like he was possessed, or being eaten, or both. It was thought that this was probably the last we would ever see or hear of Tim. Azkath said he was tired of being told by Just Joe that this had to be a Christmas show, and said that he was going to play a set of Satan music, followed by a set of Christmas music, and they would see which was better. After that was done, Azkath was going for the Satan music, which included, of all things a song by Chumba Wumba, and Just Joe was still going for the Christmas music, although he did really enjoy the Chumba Wumba. Foul Mouth Girl voted for the Satan set, and I picked the Christmas one, so it was a tie. Azkath said they would let the computer decide, he let it pick randomly from the Christmas folder, and the Satan folder. And, despite there being about five times more Satan songs than Christmas ones, the computer picked four Christmas songs, including, of all things, Wham's "Last Christmas"(!), a Christmas bullet, which Azkath claimed he had absolutely no idea how that even got in there. Sure! Maybe Tim isn't the only one who likes stuff like that. So Just Joe's and my side won. Wait, I'm not sure how I feel about being on the same side of anything with Just Joe! Oh well. Azkath said that clearly these results meant that there was way too much Christmas influence, and that, to counteract this, he was going to play a lot more Satan music for the rest of the show. Sore loser! Changing what he said after his side lost! Just Joe was not happy about this. The rest of the program was, as was the whole show, a mix of music for, to, and, about Satan, and, songs about Christmas, LE style, of course, metal artists doing songs about Christmas, or their hatred of Christmas, metal artists covering Christmas songs, parodies of Christmas songs with changed lyrics, and, comedy songs and sketches about Christmas, or the anti Christmas sentiment... There were a few segments of Movie Time throughout the night, with Tim participating in some of them. Most of Movie Time had absolutely nothing to do with Christmas, except that Azkath did review "Elf". At the end of the night, Just Joe was still saying stuff about celebrating Christmas, but, at the very end, did sign off with a couple of Hail Satans... So, whatever, or whichever, or whomever, you are celebrating, or, if you are not celebrating anything, or anyone, HAVE A VERY HAPPY, FUN TIME DOING, OR NOT DOING THAT!!!! FROM ALL OF US!!!!