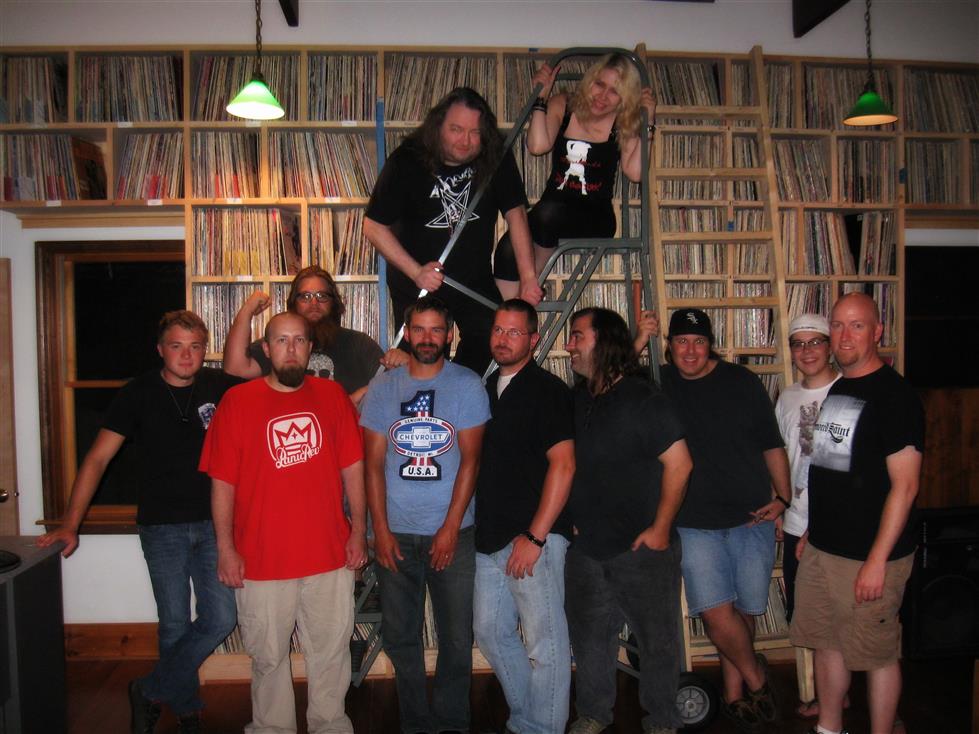 This was the last of our four specials all throughout the month of June commemorating the fact that June marks twenty years that "The Last Exit For The Lost" has been on the air. This incarnation of it, anyways. It was around for almost another decade under other names, with different hosts, on different days, in different time slots, and with different lengths, but June of 1994 is when this version of it came to be. And, all throughout this month we have brought back many voices from the past two decades, former co-hosts, and even former hosts of some of the other incarnations of the program, past guests, past bands who have been on and/or performed on the air, and, current bands as well. Present this night were, current co-host, James, Tim, someone who hadn't been here in four years, EVD, who was a long time regular co-host, and Pez, a former host from when the program had a different name and hosts. Also there was Matt, who had gotten the performance room up and running so we can now have bands play fully electric, and, the first band to do that, tonight, Hangman's Heart, Dave, formerly of the band Spater, had tested it out for us last week, but it was just him and a guitar, great, but this was our first time with a full band playing electric, they played six songs, and it went very well, they rock, you can find them on facebook. The vocalist had been here before with his then band Nonetheless, and, a decade ago, we used to ask bands questions from theinsanedomain.com to hear them try to come up with answers to those crazy questions, and one of those questions was, "What if there was an evil picnic basket, and the only way to destroy it was to sing a song about it?", and he on the spot, composed and sang a seven minute song about that, it was very impressive, and funny. We played that for him tonight. All throughout this month we have also been playing clips from The Best Of CD's, featuring the past guests, and all the hilarity and insanity. About the last half of the program consisted of mostly bands that have been in the studio over the past twenty years, many of the tracks were live performances from LE. In the first portion of the night, Pezz got to pick and play a few sets of music, and EVD got to play some music. There was a segment of Movie Time, and TV shows and wrestling were discussed as well. In the last hour, I called in to talk about my history with LE, for the past twelve years as a participant, I was a listener for two years before that, we talked about my participation in the program, as a co-host of the chat room, kind of show historian and archivist, as a writer of these recaps, and I have also been of assistance a few times, providing recordings of LE that otherwise would have been lost to posterity for one reason or another. It has been an honor and a privilege to provide any assistance I could, and I have had a blast along the way! And, something I forgot to mention then, I was one of the many, many, people that has caused Just Joe to fall down, or off of, something, over the years. In my case, I made him fall off the roof, I was actually trying to talk him into coming down off the roof, but I wound up making him fall off of it. So I did get him down, just not the way I had intended to get him down, but, hey, whatever works, right!? Thanks to Azkath for having me on to share my memories, I also talked about how I first discovered LE, I knew nothing about metal, except for glam, so it was because I accidentally stumbled across a really insane and hysterical talk break, with people laughing hysterically, and Friend yelling "FRRRIIIEEEEENNDDD!!!!!", and cows mooing, or rather, people mooing like cows, and people yelling "F The Scarecrow!", that was for a character, a Scarecrow named F, so people would yell "F The Scarecrow!", and I was forever after hooked. Azkath played those clips for me, as that's how I got started with LE. As the Tuesday after this LE, July 1st, at 9:43 A.M., to be exact, which I can't help being, to everyone else's annoyance, is my birthday, they wished me Happy Birthday. EVD didn't want to sing, so they just said it, that's ok, I have had the pleasure of being shrieked at, err, I mean, sang to, by Just Joe many, many times over the years. Nice quiet Birthday greetings are fine. Thanks for the Birthday wishes, guys, and again, for having me on. The final song to close out the fourth and final of our twentieth Anniversary specials (although, actually, we will be celebrating it all summer long, because we have had so very many awesome guests, co-hosts, and bands on over these past two decades, that we couldn't fit them all into one month, and some weren't able to make it this month, but definitely wanted to be a part of the celebration), was, appropriately enough, the song that gave the show it's name, "The Last Exit For The Lost", by the band Fields Of The Nephilim. And so thus concluded our special month long look back at all of the insanity, silliness, hilarity, mayhem, and all the rockin' bands, music, and all the awesome, cool people that have been what made "The Last Exit For The Lost" such a unique and special program, exposing us to local, independent, and underground music, as well as the great classics of metal, and having a lot of fun along the way, for two decades now! - Fire Eater Wizard

Every Time I Die "The Great Secret"
Stork "Bat"

Miltary Wife "Empire Number 7"
Armed with Valor "I'd Hate to See It..."
O.Z Willis "Too Much"
Speria "Here's To Optimism"
Mr. Downstairs "In a Bottle"

Fields of the Nephilim "The Last Exit for the Lost"