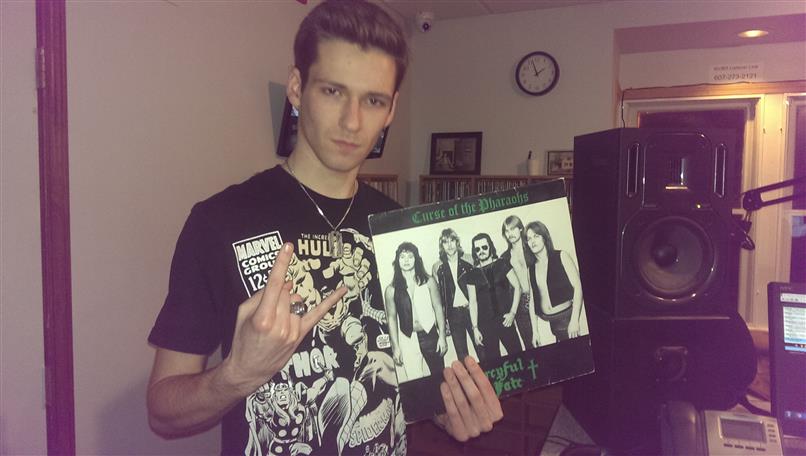 Present were Nathan and Justin. This was a Tribute To The Past Show, an entire program of older metal of all genres. There were a couple of Connect-A-Sets, one featuring all bands that had some connection to King Diamond, and one featuring all bands with a connection to Metal Church. There was a set of dark, doomy music, one of all female fronted bands from the '80's, and a very heavy set among others. EVD was absent. Azkath thought Nathan might have something to do with that. Nathan wouldn't admit it, so Azkath hypnotized him. First he asked him where EVD was? Nathan said, "In the ground", ominous sounding. Then Azkath told Nathan to go out on the porch, get naked, and do jumping jacks, which Nathan did, then didn't remember why he had done that. There were segments of Movie Time. There was, of course, no Old School Hour, as the whole program was Old School. There was also no Cover Set. There were a couple of Old School metal Christmas songs, as we are drawing near to that, but they were by satanic bands, King Diamond, and, Venom, Christmas Last Exit style...

Abstract "Ocean of Pain"
Chainsaws and Children "Flame On"
Phantom Crew "What Have I Done?"
Acrophet "From the Depths"
Potential Threat "Self Inflicted Pain"

Tyrant "Listen to the Preacher"
Oz "Search Lights"
Nuclear Assault "Betrayal"
Vio-Lence "T.D.S. (Take It As You Will)"
Warlord "Silloquy"