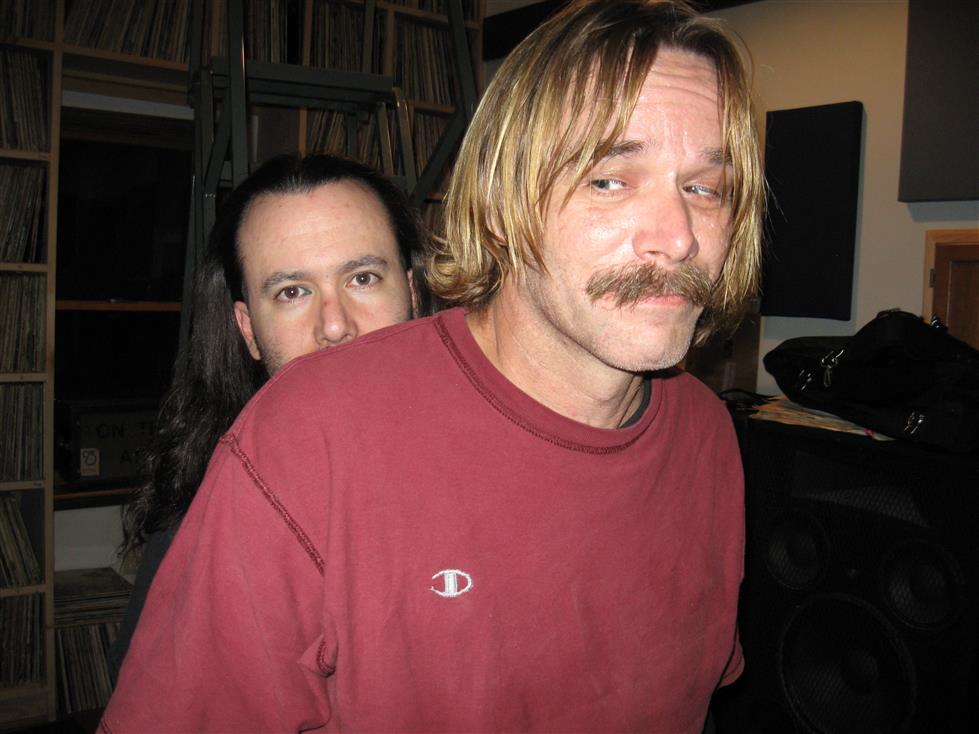 The very day of this LE, Sunday, the 23rd of November, was Just Joe's eleventh Anniversary here. Happy Anniversary, Just Joe. Present for it were, Just Joe, which was fortunate, it would have been a shame if he hadn't been there when his Anniversary was the exact day of LE, which can only happen about every six years, EVD, Rick and Randy from "The Metallic Onslaught", Eric, Rob and R.J. from the band Thirteen South, and, someone who hasn't been here in about fifteen years, but who was there from the very beginning of LE, and was a regular co-host for a long time, The Almighty Monkey! He was going to be here earlier in the year, for our twentieth Anniversary Shows, but we learned tonight that he had fallen thirty feet out of a tree, and broken his back. Funny, you would think that monkeys should be really good at climbing trees, I mean, isn't that what they are supposed to do? There was a lot of reminiscing about his time on LE. EVD duct taped The Monkey, Randy, and Eric together, and then Azkath and Just Joe beat on them with a big metal blade, a cookie sheet, a guitar. Randy got a balloon shoved in his mouth, which he bit and popped, and Randy got a lot of disturbing, disgusting man love from Eric and The Monkey while they were all stuck together. And Azkath also put Crappy The Clown's underwear on Randy, I mean, he wasn't wearing it, but had it put on him, rubbed in his face. Randy also had to wear Dave's gross, smelly beard, which EVD had ripped off of Dave with duct tape the week before, Just Joe got to put it on him, he was given that pleasure because it was his Anniversary, after all. Randy was quite traumatized by all that happened to him this night, but he did get to break a record over The Monkey's head, which made him happy. He had to wear the beard because Russian Roulette was played, where either he or Just Joe would have to wear it, and it turned out to be Randy. But apparently, if you are in the band Thirteen South, you like wearing Dave's beard, because last week Rob had worn it on various parts of his anatomy, he did all of it himself, and now R.J. willingly put it on himself. Music was played for The Monkey, bands he likes, or that Azkath thought he would like, although I must say, I'm extremely disappointed that his theme music, the theme to the old cartoon show "The Banana Splits" as done by some nineties alternative rock people was not played, I love that song, and that was one of my favorite shows when I was little, like about ten thousand years ago. A set of songs that used to be staples on the old radio program, "The Rock Shop", was also played, also for The Monkey, as he liked that. There was a lot of reminiscing about the past eleven years that Just Joe has been with us, there has been SO MUCH that he has done, and had done to him, in that time. I made him fall off the roof once, I was actually trying to help him, trying to talk him into coming down, but instead I made him fall off of it, which got him down, just not the way I meant to. Oh well, I guess I suck at therapy. Just Joe got to pick a set of music. There were segments of Movie Time, and Just Joe discussed a web series as well. The last hour was The Old School Hour... And, once again, A VERY HAPPY ELEVENTH ANNIVERSARY TO JUST JOE!!!!!