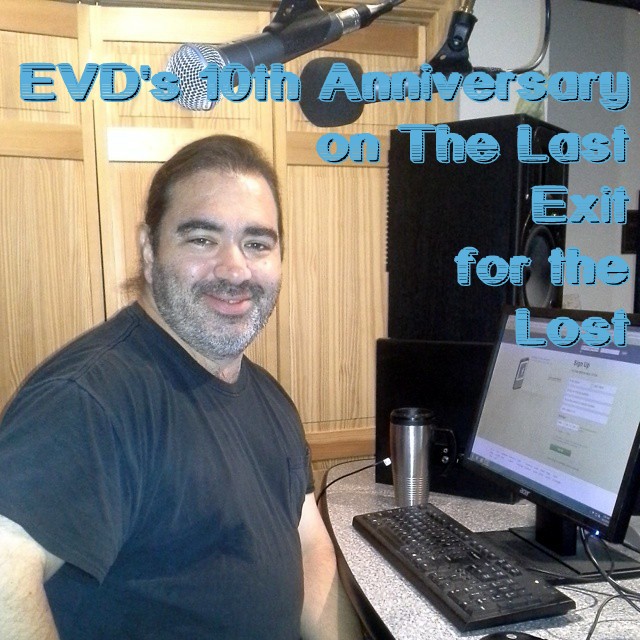 Present were, EVD, Nathan, Tim, James, Justin, who hadn't been here for several months, and, Briana, of the band If Man Is Five. She played some songs acoustically in The Performance room. She sounded awesome. A track from one of If Man Is Five's CD's was also played, as well as a brand new song from them, from their new incarnation of the band, it was cool. You can find them on Bandcamp, Facebook, and, YouTube. Briana was interviewed, she told us about this new lineup of the band, what they're up to, and, what she's been up to since she's last been here, as it has been quite a while. Azkath played an interview which he had conducted with the band One Eyed Doll. It was bracketed by their songs, and was quite entertaining, as, as Azkath explained, the first time he recorded the interview, the recording program crashed, so they had to do it again. Kimberly had been serious in that interview, but, for the second one, kept cracking up at everything, laughing a lot, and, giving silly answers and explanations to things, like, that, apparently she is a baby chicken, her band mate is a salamander, and their song/video is all about puppies, it was amusing. They are an awesome band, they are on Facebook, and Twitter. Two days before this LE, September 11th, was EVD's tenth Anniversary being here, Happy Anniversary, EVD(!), and, isn't that an appropriate date for him to have made his first appearance!? So Azkath got him an Anniversary gift. Well, actually, he had told Tim to get it, he told Tim to get EVD something that, he, Tim, would really hate, since, if Tim hates it, it should be a pretty safe bet that EVD would love it. That was a good theory, but, in practice, it didn't work out. Tim got EVD a book by conservative talk show host Sean Hannity. And, although Tim, who is a conservative, doesn't like Hannity, EVD, who is really liberal, hates him. EVD took his gift and clobbered Tim repeatedly with it, and then did the same thing to James, for some reason, even though James had had nothing to do with getting the present. James wailed that he would have gotten EVD a Rob Zombie CD, which enraged EVD even more, as he hates Rob Zombie, so he wailed on James some more with his present. Then Nathan, who, being a Bronie, which means he has terrible judgement, made the mistake of reading from the book out loud, just because he thought the phrase "I don't drink the Republican Cool Aid" was funny. What's so funny about that? I guess you have to have a Bronie's mind to understand that. EVD became infuriated again, he began ripping up the book, and shoving it in Nathan's mouth. Nathan was forced to eat A LOT of that book. He became traumatized, and was curled up in a fetal position, clutching his Ipod. Well, Nathan, that will teach you to read conservative literature out loud in EVD's presence, and all for something that wasn't even funny! But, even though EVD didn't like his present at all, he did really enjoy the use he put it to, so he did wind up having fun on his Anniversary. Briana and James shared with us what their earliest memories were. And, we had a strange phenomenon this night, people kept changing into other people. First Justin turned into Tim, that must be what happened, because Justin was gone, and then Tim was there, and then the same thing happened with Briana and James, she was gone, and then he was there. Weird. There were segments of Movie Time, and TV programs were discussed as well. And, in our new scheduling of features, The Cover Set was at 4:00, and The Old School Hour was at 2:00...

If Man is Five "Choas"