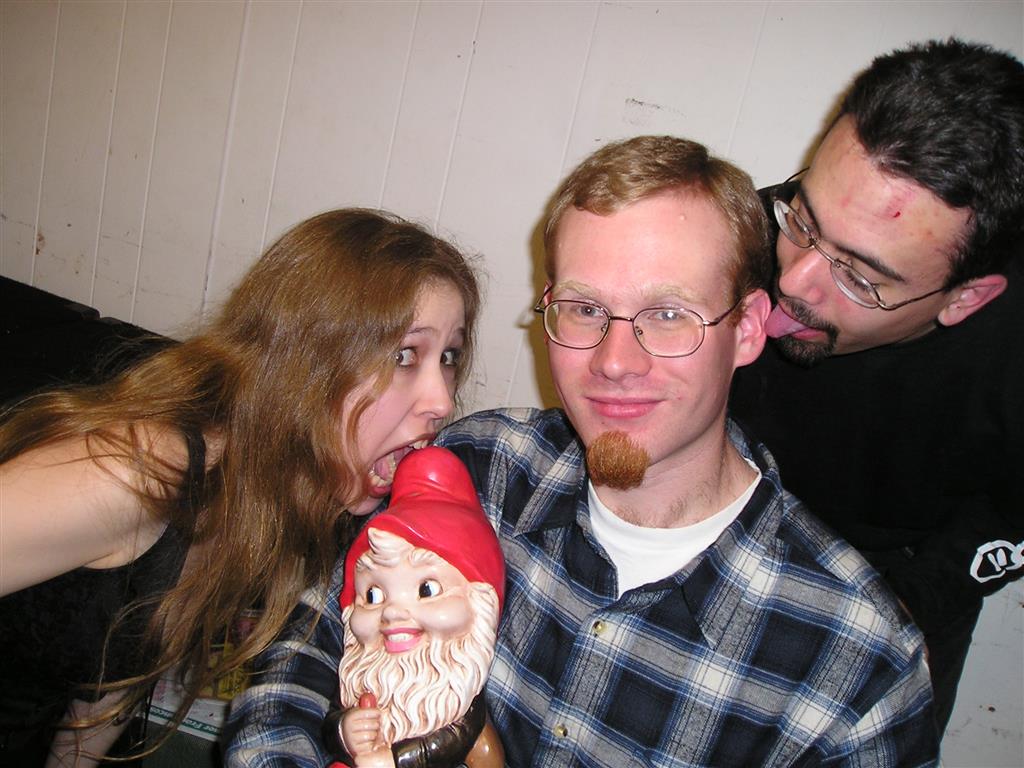 Angela, the Vocalist from If Man Is Five was there, (unfortunately band mate Brianna was ill and thus could not make it). She was there to talk about an upcoming concert. Saturday, May 7th (this Saturday) If Man Is Five and a bunch of bands, one of which is another LE visitor and favorite, the band Others, will be performing at The Lordes Breast Care benefit at The Skatepark In Johnson City. It costs $5 and should be a great show, so you should attend it! Angela performed lots of If Man Is Five songs acoustically on the air. She has an awesome extremely powerful voice as anyone who is at all familiar with the band knows. Her performances on LE rocked, her powerful voice blowing out all the levels as usual. It was awesome! A member of Lotus Project was there. No, of course not David, the worst co-host ever, he's too busy getting totally wasted every weekend, which is more important to him than his co-hosting duties, to bother to put in an appearance. No, it was Pat, the guitarist. Just Joe was there and being his usual stupid annoying obnoxious self. He and Azkath got into a fight, one which was to be the first of many that night. This one started when Just Joe threw a cup of water at Azkath. It hit the board, hitting a button that caused a squealing sound. Azkath grabbed a cup, put a little water in it, and began chasing Just Joe. Just Joe grabbed Pat and pulled him in front of him, meaning to use him as a human shield against the water he knew Azkath wanted to throw on him. But Pat just casually reached back and tossed his own cup of water (which had much more water in it than the one Azkath had), right into Just Joe's face. Pat was roundly congratulated for his nice work. It was decided that although Just Joe had not been told this beforehand, (who cares about such minor unimportant technicalities!?), that that was going to be considered his challenge for that night, which, of course, he had now lost. Just Joe just doesn't seem to do too well with any challenges involving glasses of water apparently. Pat got to pick a song to be played for winning the Just Joe Challenge, and Just Joe did not get to pick one for losing his challenge. Then there was another brawl. Pat threw Just Joe on the ground, and Azkath stepped on his head and made it bleed. Later, Just Joe was becoming rambunctious and annoying yet again (he just can't seem to help himself). Pat and Azkath both attacked him again. And this time, in edition to thoroughly beating him down, they totally destroyed his chips. Azkath sat on the chips many times. By the time they were through, the poor chips were absolutely totally and thoroughly crushed. Now you can kill Just Joe, you can brutally beat him, you can torture him... All of this he is just fine with. But mistreat his potato chips, well, this he finds absolutely and totally devastating! He was crying over his ruined chips. Pat left, and Azkath told Just Joe that he wasn't going to beat him any more. Well, not any more for the rest of that night, at least. In fact, Azkath told Just Joe that the rest of the night would Be Just Joe appreciation time. This time was spent telling Just Joe that they liked him and loved having him there. And in fact, as part of this Just Joe appreciation, Just Joe finally got a song by Triumph (one of his favorite ones) played for him. And so that was the show. At the end of it, Azkath told Just Joe that now Just Joe appreciation time was over, and that that would be the last of it. So, this week, we go back to hating Just Joe and to trying to destroy him.

Mandrake "The Necklace"
Rage "Alive But Dead"
Elusive Travel "All the Things I'd Die For"
Bruce Dickinson "Kill Devil Hill"
Orphaned Land "Halo Dies (The Wrath of God)"
Mindless Self Indulgence "You'll Rebel to Anything"
Brainstorm "All Those Words"
Impelliteri "The Writing's On the Wall"
Beyond the Flesh "Prophecies of the Dead"
If Man is Five "Twilight Zone - Live in Studio / Azraela - Live"
Lotus Project "Storm" (R)
Sonata Nocturna "Hatefull"
Midnattsol "Lament"
Napalm Death "The Great and the Good"
If Man is Five "Water - Live In Studio"
Dormitoryeffect "What Have I Done"
The Gathering and Wim Kratsborn "Every Day is a Thousand Years"
Astral Doors "Lionheart"
Fantomas "Charade" (R)
Orphaned Land "Mercy - Live"
If Man is Five "Hemmorhage - Live in Studio"
Mindless Self Indulgence "Tom Sawyer"
Still Remains "With What You Have"
Wednesday 13 "I Want You... Dead"
Scar Symmetry "2012 - The Demise of the 5th Sun"
Worm Quartet / Sudden Death "Inner Voice"
If Man is Five "Azraela - Live in Studio"
Soilwork "Fate in Motion" (R)
Subterranean Masquerade "No Place Like Home"
Others "Powers that Be - Live Acoustic"
Anathema "Pulled Under at 2000 Metres a Second"
Cephalic Carnage "Wraith"
Elusive Travel "Seperation... The Fastest Way to the End"
Korpiklaani "Native Land"
Manowar "Sign of the Hammer" (R)
Black Labeled "Kill the Pepsi Generation"
Gizmachi "Burn"