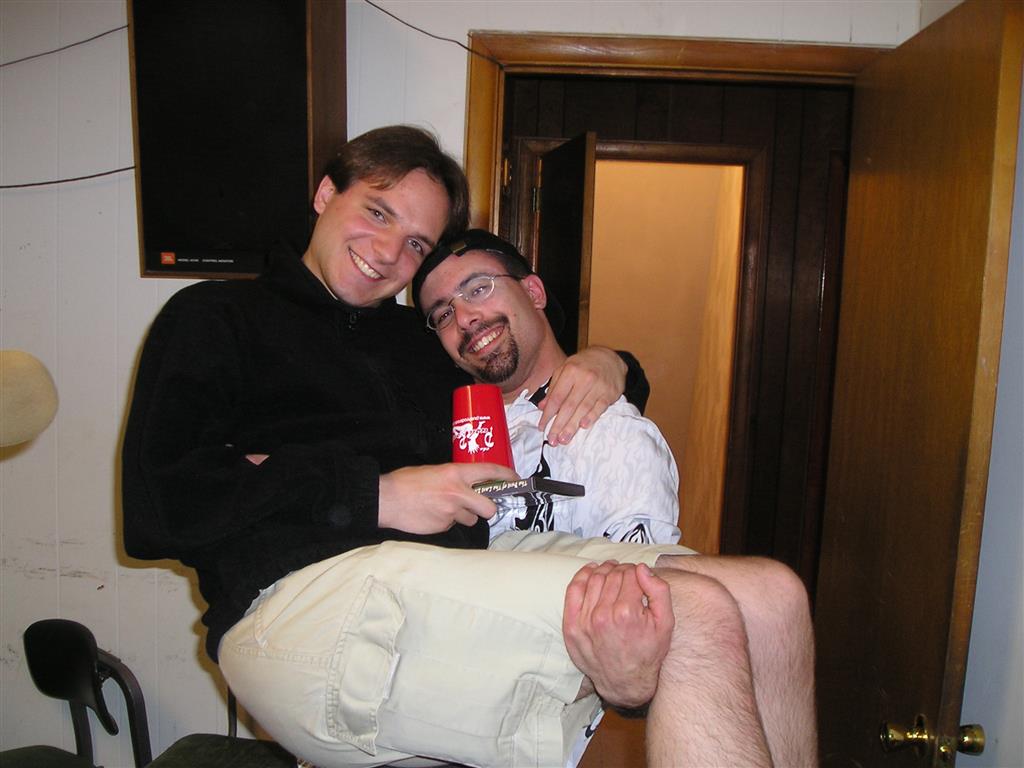 The absolute worst miserable excuse for a co-host of all time hands down actually saw fit to put in an extremely rare appearance. Yes, that's right, David of Lotus Project was actually there... For all of one whole talk break! How nice of him! He was kind enough to drop by to let us know that this would be his last appearance on LE before he moves to Florida at the end of May. Now, since that is a month and a half away, you might ask why he couldn't fulfill his co-host duties for at least some of that time. Well, it seems he has some much more important things to do with his weekends... He plans to get totally wasted on every remaining weekend between now and then... Ah, the dedication! The loyalty! The commitment! How will LE ever manage without him!? He also has his short poser haircut now. And sadly, it appears that Lotus Project will probably break up. Too bad, as they were a great band. They are however, going to try and still put out their CD, so watch for that. See, because of David's selfishness (just having to move away!) a great band had to die. Lousy co-host, and lousy band mate. Crow was there. He talked about The Pushrods upcoming CD release show. It's Friday, the 22nd of April, (this Friday) at Castaways. It's in the middle of their 80's night, and The Pushrods go on at 11:00. They will also be shooting the video for their song "Girls In Vinyl Skirts", and they will be giving out free Pushrods stuff (beer mugs and free beer included) to the first 50 people through the door. So it should be a fun night, and you should all attend. Just Joe was there and still gloating over his winning his challenge the week before (lasting two minutes in a shoot fight with Azkath, and not submitting or tapping out). Azkath told him that, for his challenge this week, they would have a rematch. He told him that, this time, it would be outside, and that just Joe had to try and last for just one minute in a shoot fight. And that, if somehow he did manage to do that, he could hear some Triumph. Just Joe was full of confidence (among other things) and they started outside... On their way out, Azkath asked Just Joe "what was that, over there, by the wall?". Just Joe got distracted (that's easy to do with him), asking what?, and then saying that he didn't see anything. Then there was a horrible clang as Azkath bashed Just Joe over the head with a steel chair. The hit was so hard it left a Just Joe shaped dent in the chair and knocked Just Joe out cold. And, since he was so nice and unconscious and all, Azkath took this opportunity to return him to the basement, dragging him again, so that his head banged against every single step again on the way down, and locking him in there. After awhile, Just Joe came to and phoned upstairs. He was livid. He said he hated them. They were laughing at him saying why would he hate them, and telling him to enjoy the basement, as he would be there a long time. Just Joe said that oh no he wouldn't either, as he had a secret weapon. They didn't believe him and kept laughing at him. Just Joe said that they would let him out. They said that, no, they would not. But Just Joe kept insisting that oh yes they would because he had this secret weapon, which he was sure that Foul Mouth Girl especially would be very interested in. They finally asked him what this secret weapon was... He said that he had Foul Mouth Girl's jacket, and was wearing it, and singing "Weird Guy in a Little Coat". FMG became extremely enraged at this (fortunately not enough to swear though, for a miracle), and took off for the basement screaming that Just Joe would pay for this. Well, who can blame her!? I mean, who would want Just Joe wearing anything of theirs!? I mean, you just never know where he's been! *shudder* And besides, Just Joe was threatening to do terrible things to the hostage. FMG Got down to the basement, and attacked Just Joe. But, then there was a thud, and, unfortunately, Just Joe emerged from the basement. In a moment, FMG could be heard, from the basement, saying that Just Joe had knocked her down and made it up the stairs and out the door before she could get up and get there. So, now she was locked down there. Luckily, she somehow still managed to keep from swearing. Will wonders never cease!? Just Joe was quite pleased with himself, and began bragging again. And, apparently, The Almighty Monkey called into the show again (not on air). He threatened to make a visit to the show sometime (And just over ten years later, he did!). Just Joe and The Almighty Monkey! Just picture it! On second Thought, I don't think I want to picture that! *shudder* And so went LE for that week. Now Just Joe has lost two of his challenges. And, come to think of it, when he loses them, he loses in the 1st second (first with Crow and the glass of water, and then to Azkath with the steel chair, so, I guess, if he can just get past the 1st second, then he's alright).

Neaera "Broken Spine"
The Loiterer's "Ron Jeremy"
Foetus Inc. "Dead Christian"
Primus "Mr. Krinkle"
GWAR "Sick of U" (R)
Pyogenesis "It's on Me"
Exhorder "Slaughter in the Vatican"
inRed "When You Die"
Future 86 "I Want It All"
Bruce Dickinson "Navigate the Seas of the Sun"
Draconian "The Everlasting Scar"
Elusive Travel "Seperation"