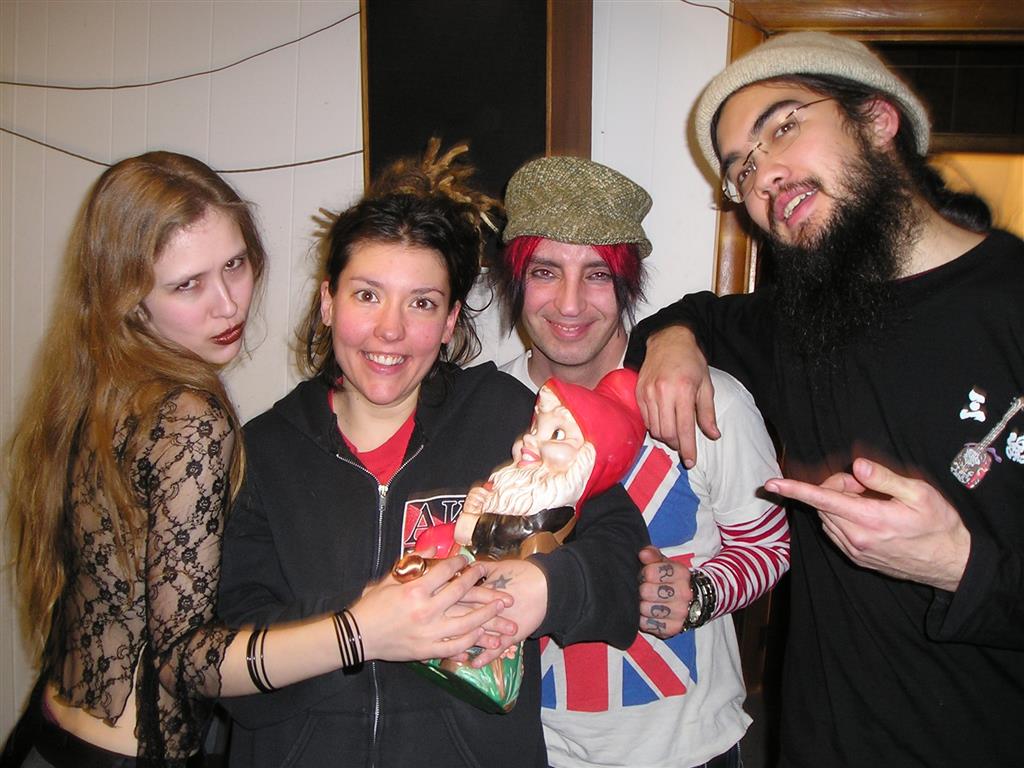 There were no more freak events (of nature, or otherwise. No, the freak events were once again reserved for the show, as it should be), so, there actually was a LE this week. Attendant at this show were: Ritchie of The Pushrods, Just Joe, and some new people, one of whom was named Michelle, and a new guy named Ken. Ritchie performed some more songs acoustically, including couple new songs. While he was performing, as is the custom now, he had to contend with being tormented by Just Joe. And, there was a new and bizarre twist to this torment. Michelle had brought with her a cigarette lighter, and while Ritchie was trying to perform his songs, Just Joe was poking said cigarette lighter in his ear. Oh, and did I mention that this lighter was in the shape of a, well, a penis!? Ritchie put up quite a good performance considering what he was enduring, guess he's getting used to performing through Just Joe's molestations. Then they instructed Just Joe to take someone to the basement. They decided and told him to have it be Michelle. Just Joe did this, quite roughly (he had been being gentler doing this lately, but, this time Michelle went down the stairs flailing and screaming). Foul Mouth Girl then locked the basement door to keep Just Joe down there, saying that if a human sacrifice was what was needed to get rid of Just Joe for a while, and get some peace and quiet, well then it was a fair trade. However, at the next talk break, we were informed that Just Joe was now outside, curled up in a fetal position, listening to Dennis Leary, and unresponsive. They asked Michelle what had transpired that had traumatized Just Joe so badly. And apparently, although Just Joe had started off in charge of the situation, he badly lost control of it. Although Michelle had gone down the stairs flailing and screaming, and had flown through the air and went sprawling onto the couch, she then told Just Joe that she was going to show him who was in charge... And she shoved the penis shaped lighter... Never mind. So, Just Joe was raped with a dick shaped cigarette lighter. They thanked Michelle for doing such an excellent job of Dispatching Just Joe for them, and then she and Ken were on their merry way. Just Joe refused to talk about it when they asked him what had happened to him, and why he kept holding his butt as if it were in pain. There were also some other beat downs and brawls throughout the night involving a chair. And we finally got an update on how the attempted combining of The Wheel Of Satan with The Keys To The Apocalypse to try and bring about some kind of an Armageddon is going... Apparently it is not going too well so far, but it is still being worked on... So, we shall wait and see... Then it was decided to try something new... They called it Ritchie's Challenge, and it went like this... Just Joe and Ritchie would come up with classic rock songs and try to perform them. They did some Boston and some other ones. And then Just Joe Started singing... VERY badly! Right before they went into the feature for the night, Ritchie played and Just Joe sang "You're Just What I Needed" by The Cars. It was absolutely hideous and was apologized for by Azkath. In the final portion of the show, we got to hear The Pushrod's performance from The Extreme Soundscapes DVD release show a couple months ago played in it's entirety, well, in it's entirety except for Ritchie's copious swearing between songs, which had to be edited out of course. It sounded great and rocked!