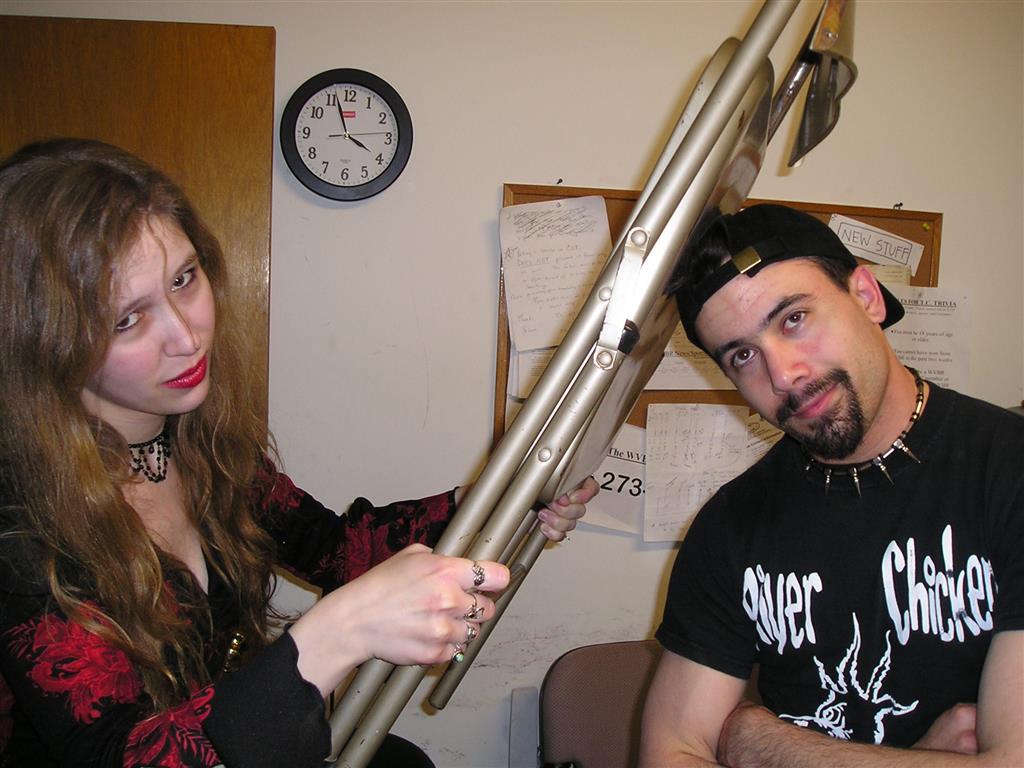 After several weeks of Pushrods absence from the show, there was once again Pushrods representation, as Crow, their drummer was there. He told us how their tour playing in Florida had gone. It went quite well. Just Joe was there (on LE, that night, that is, not in Florida with the band, which I'm sure the band was very happy about). And, as it was the night when the clocks are set ahead one hour for Daylight Savings Time, it was the annual Tribute To Glam Hour Show (which we all look so forward to all year long), in which the hour from 2 to 3 is totally dedicated to playing nothing but glam music. Just Joe was very excited about this, and said he had brought a whole stack of glam music to play. So, when 2:00 arrived, he was very happy... But, of course, at 2:00, it became 3:00, and so they informed him that glam hour was over (after one song by Firehouse). Just Joe kept insisting that it was time for much more glam (not grasping the concept, because he is too stupid to do so), and they kept insisting that they had had glam hour, and that now it was over, and that it had been great, and what was he complaining for? Just Joe became irate, ranting and pouting, and threatening to hijack the show and play more glam. Like he could ever be smart enough to figure out a way to pull that off! Later they were beating up on Just Joe... Just Joe removed his spiked necklace, intending to use it as a weapon. He went to hit Azkath in the leg with it, but didn't get to do that, as the necklace disintegrated in his hand, exploding, sending pieces all over the room, down the hall, and, even into the basement. So let that be a lesson, if you are in a fight, do not try to defend yourself with a necklace, as, apparently, they do not make good weapons at all. Or at least they don't for Just Joe. Later, it was time for Just Joe's challenge for the night. They gave Crow a glass of water, and sent him and Just Joe outside... Just Joe's challenge was to try to make it back inside either without getting any water on himself, or after getting the water all over Crow, either would be a win for Just Joe. He had one minute to accomplish this challenge. Now, Just Joe had, up to this night never lost a challenge (granted, some of them really haven't been too hard, distracting Ritchie while he's playing guitar and singing, Penguin throwing, getting an idiot like me to change her name to Joe for National Joe Day), but this one he lost in the first second. As soon as they were outside, Crow tossed the glass of water right in Just Joe's face. And, so, Just Joe suffered his first loss so far. He tried to say that he hadn't lost, that his face was wet because it was raining out, but, everyone knew that that was not the reason, there was too much water on him for the mere second he had been outdoors. Oh well, can't win 'em all... Everyone is a loser sometimes. Wait... Just Joe is a loser all the time, but in the other sense of that word. :p And so that was the show for the week, the annual Tribute To Glam Hour, among other things. It was a good show, a bit too heavy on the glam, perhaps, but, then again, it only happens once a year. If it was a bit too much glam, well, how can you fault that!??

**GLAM HOUR**
Firehouse "All She Wrote"

Never the Sunshine "Superstar"
Skodag "Symbolize My Hate"
Robot Goes Here "Wake Up"
Elusive Travel "All The Things I'd Die For"
The Pushrods "Stalker"
At the Gates "Forever Blind" (R)
Hammerfall "The Templar Flame"
Wolf "Don't Fear the Reaper"
He is Legend "The Seduction"
Despised Icon "End this Day"
Cryptopsy "Cold Hate, Warm Blood" (R)
Kryoburn "Against My Evil"
Snuff "Bob"
Chariot "Someday, in the Event that Mankind actually figures out what it is that this world Revolves around, Thousands of People are going to be shocked and perplexed to find out it was not them, sometimes this includes me"
Chixdiggit! "Geocities Kitty"
Rapture "About Leaving"