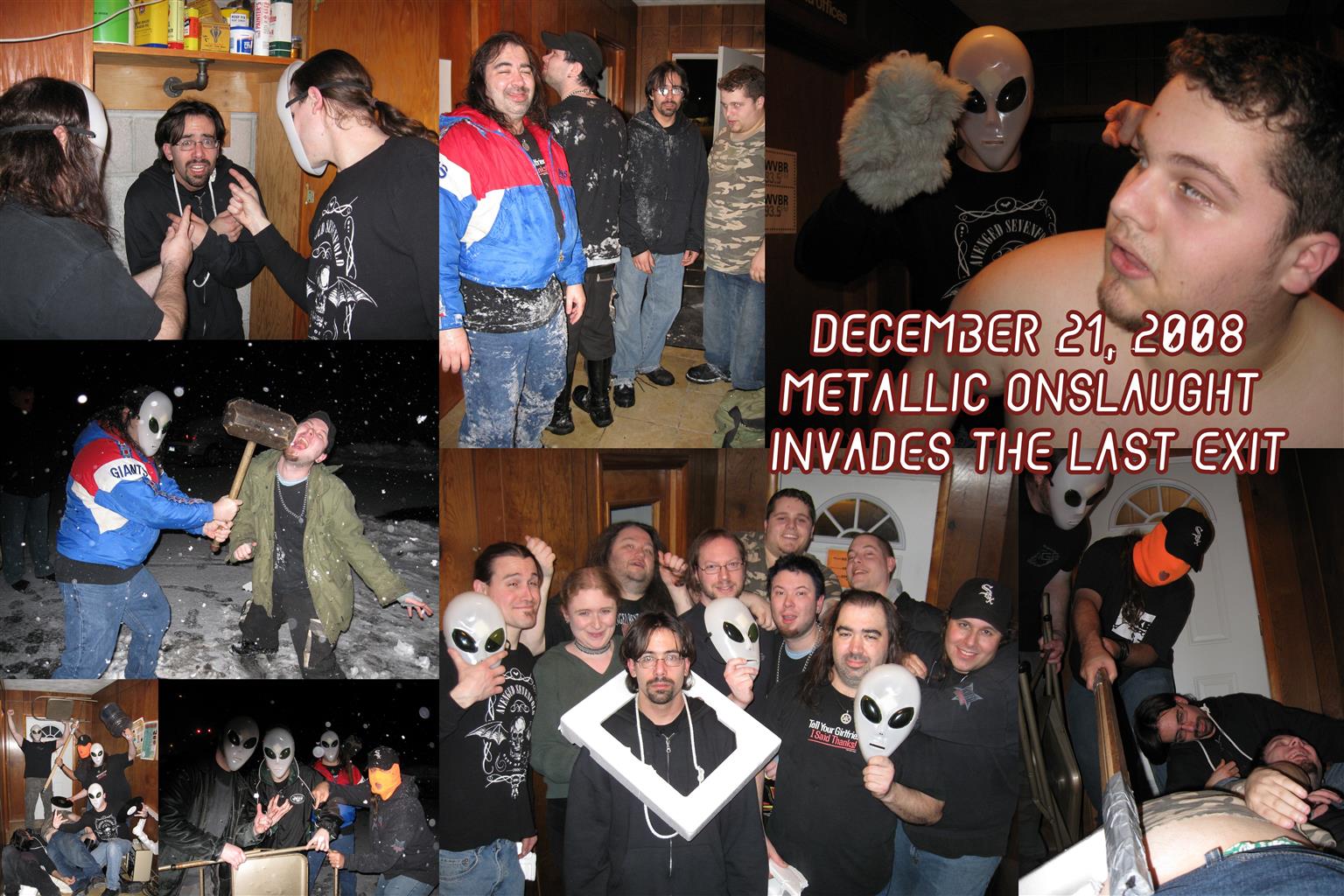 This was our 4th Pre Anniversary Countdown Celebration To The End Of The World Show (and, as the world is slated to end on December 21st, 2012, and this LE fell on December 21st, it is the only Pre Anniversary Show which will be exactly on the date, exactly 4 years from today, no more world, so it was extra special). Now, as I'm sure you all remember, that The Masked Man had claimed he would show up at this show and said he would have this be the end of the world for LE. So Azkath had been having Just Joe and Dave train all week long, and said they were ready for him. But, he said that he didn't really think The Masked Man would show up at all, because The Masked Man was a wussy, and a coward. They taunted and insulted The Masked Man. And then all havoc ensued... Not one, but four Masked Men barged in, and quickly subdued everyone there, there were piles of subdued bodies all over the floor. Then The Masked Men took over the show, and began playing their music, which consisted, among other things, of Kiss. After a couple hours of this, Azkath informed The Masked Men that he knew who they were... One of them, the most obvious one to figure out, was EVD! And the other 3...? Were, Tim, from Century Media, Lance, and Joe, no, not Just Joe, but, senile, old Joe, from The Metallic Onslaught! They had staged an invasion, and were responsible for all the sabotage that's been going on these last few months, including nearly getting everybody killed, and they had done this with the help of traitor EVD, whom, it turned out, is a cheap whore, selling everyone at LE out for a mere twenty bucks! Yes, that's right, twenty bucks for like several months of work! EVD! SHAME ON YOU! HOW COULD YOU! And, just what was the gang from MO's reason for all this sabotage, and attempted coup? Well, they were pissed at Azkath for sending them Jeffie, and for continuing to fix him, and send him back every time they killed him. Unbelievable, even nice guy Tim kicked ass and dealt out the beat downs, and poser Lance! And, old, senile Joe, who has never once been to LE, in the entire 15 years of this incarnation of it (or in any of the other incarnations of it either, for that matter)! Azkath made them a deal... If they would relinquish control of LE, he would fix Jeffie, and, by next week, Jeffie would no longer be annoying and obnoxious, but would be smart, and normal. The deal was excepted. But, of course, the participants in this treachery had to be punished... Well, all except for Joe, as, in spite of his treachery, at least he finally showed up for a visit to LE, before the world ends, and, who, if the last 15 years are anything to go by, will never be back for another visit before the world ends. For Tim's punishment... Just Joe and Dave took him down to the basement, and, from the sounds of the screams which issued forth from down there, did unspeakable things to him there, probably involving a naked Just Joe and Dave, For Lance's punishment... His pretty boy, glam hair was rubbed all over Dave's naked, sweaty belly. And for EVD's punishment... Well, his punishment would have to be more severe, as, after all, he had betrayed LE from the inside, and MO would never have been able to do what they did without his help, plus the fact of the ridiculously low price he sold us out for. Just Joe, Dave, Brian, and Sean, dragged EVD out side, and made a snowman out of him, and Dave splashed (the wrestling move, not with a liquid, although, given that it's sweaty Dave, I'm sure there was some liquid involved as well) him in the snow. Well, a snowman is a Christmas-y thing, and, seeing as this was the last LE before Christmas this year, it was all very fitting! Metal and comedy Christmas songs were played all throughout the night. They also flipped EVD's car over in the snow. They informed EVD that his punishment would go on for multiple weeks, unless he could think of something terrible to do to The Metallic Onslaught, something that couldn't be traced back to LE... EVD claims he can do that. So, tune in to The Metallic Onslaught next week, and see if EVD succeeds in that, or if his punishment for his betrayal will have to continue on LE, and to experience the new, smart, non annoying, Jeffie. And, as next week's LE falls the nearest to Christmas, it will of course be a We Love Satan Show. It is hoped that Satan will put in an appearance this year for his big day, he has been missing them lately. And, apparently, he is still trying to obtain a body, so we'll see what happens with that. So be sure and tune in for that... 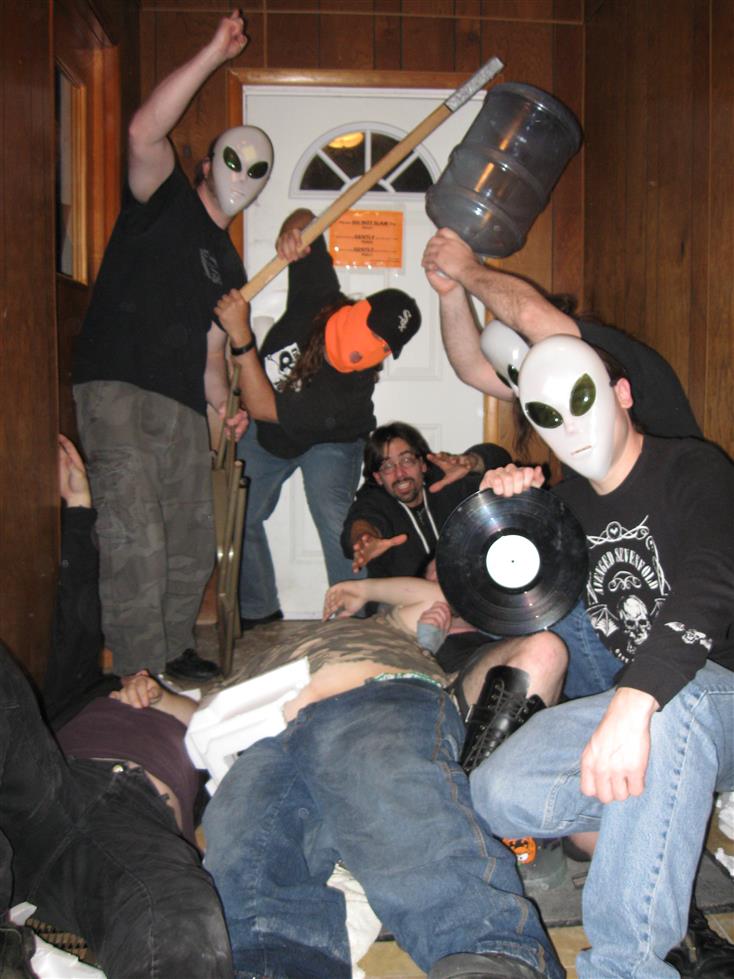 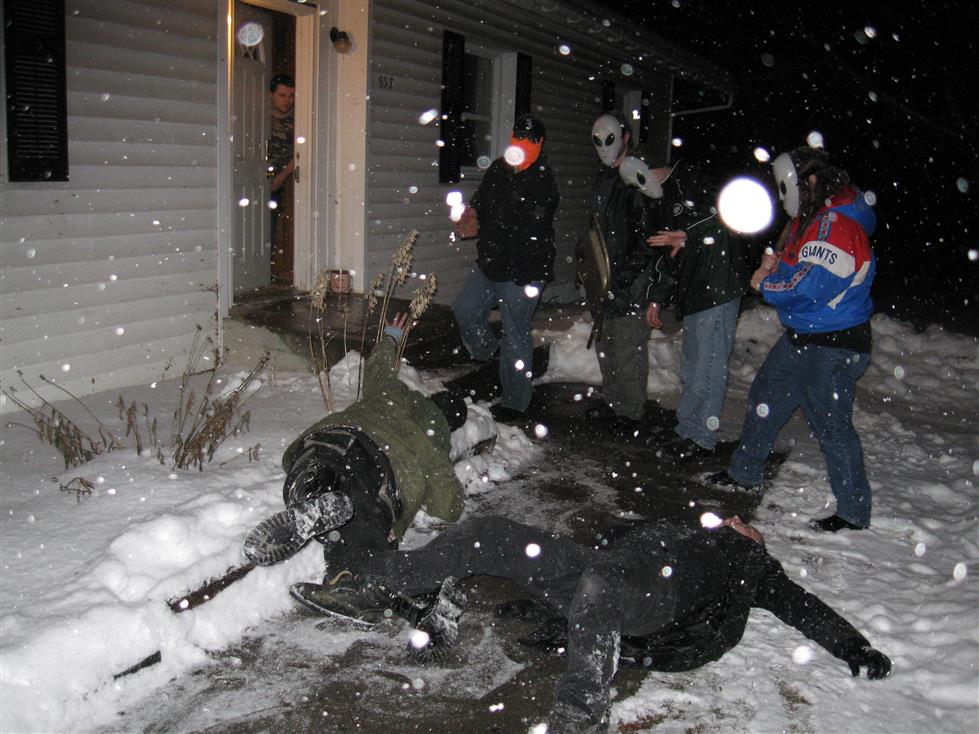