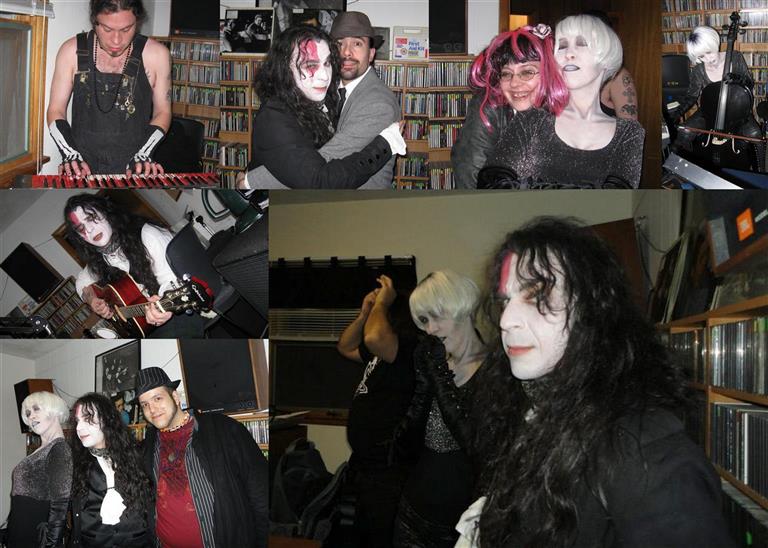 As both Halloween and this LE began at midnight, this was a very special Halloween program. EVD and Shane were there in the first part of the night. But most of the show featured bands. There were two bands, one was there for about the first couple hours, and one was there for most of the night. The former was the band Cult Of Saints, it was their first time here. They were interviewed, told us about themselves, and tracks from their CD were played. They are cool. The latter band was Zadoc... And The Nightmare. They have added instruments to their band, they now have a cello and a mandolin. They were there until after 4:00. They played several sets of music, each with about three songs in it. They sounded awesome! They also updated us on what has been, and is, going on with the band, and about their forthcoming new CD. There was some molesting going on involving Just Joe and the band Zadoc And The Nightmare. Just Joe arrived quite late, about three hours into the program. After Zadoc And The Nightmare had gone, in the last part of the night, there were two segments of Movie Time, and one segment of Halloween Anomaly Corner. There was of course lots of Halloween music, both metal and comedy songs all throughout the night, about zombies, monsters, evil, and, just about Halloween in general...
-Fire Eater Wizard
Playlist
Helloween "Halloween"
King Diamond "Halloween"
Heaven and Hell "Time Machine - Live"

Zadoc... and the Nightmare "Silk and Cyanide / Road to Yesterday / Nightshade - Live in Studio"