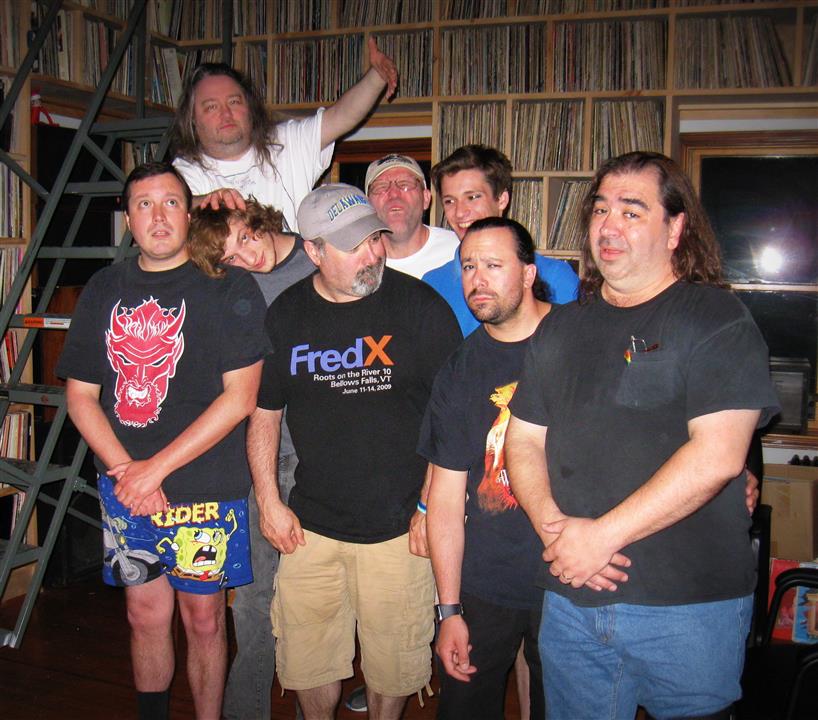 To make up for the carnage that was No Pants Day Weekend two weeks ago, this was to be a MORE Pants Day Show. Present were, EVD, Just Joe, Nathan, Justin, Mr. Linda, Chuck a host of the program which follows LE, "The Salt Creek Show", and, Sloth. Sloth, however, thought it was No Pants Day Weekend, because you see, Sloths are extremely slow, he probably left his home two weeks ago for that, and was just arriving now, and, if he meant to attend More Pants Day, then he'd probably show up two weeks from now. So he had no pants, and a really big bulge in his boxers. Just Joe was upset he had to wear pants and Sloth didn't, so he also became pantsless. He and Just Joe kept molesting Chuck, rubbing their pants less selves all over him, Sloth wanted to give him a rub down with lotion, and Chuck almost got duct taped to Sloth and Just Joe. This was all too much for Chuck, after all, he hosts an old timy country program, where I'm pretty sure stuff like this doesn't go on. Chuck said he was leaving. Azkath blamed Just Joe for this, and went to give him a beat down, but, in the process, Chuck got knocked out cold, again, something which I'm pretty sure doesn't happen on his program. Azkath blamed Just Joe for that, too. He told Sloth and Just Joe to do something with Chuck, as he was sure he would be really upset when he woke up. He told them to carry him home, put him on his front porch, and make sure they put his hand down his pants, that way, when he woke up, he wouldn't say anything about it, he would be too embarrassed. They took him to his home. However, when they returned with a report, according to Sloth anyways, they did a lot more than just put Chuck's hand down his own pants, they put their hands down his pants, and each others's as well.

Just Joe got really loud, and blew out everyone's headphone's so Azkath hit him repeatedly with a baking sheet, and did that to Sloth, too, because he was also being annoying, they both ended up on the floor for a while.

Just Joe kept putting anything he could find that belonged to Nathan down his pants. Nathan complained that every time he's there, his stuff keeps winding up down someone's pants, first Jeffie's, now Just Joe's, Just Joe put everything he could get his hands on that belonged to Nathan down his pants. Well, Nathan, you should know by now, if you have anything you value, don't bring it to LE, because it is sure to get molested, abused, and/or ruined.

It was observed that Nathan and Just Joe both have really long arms, so they had Sloth measure their arms by having them extend them together. Nathan's apparently are a little longer, but he is taller.

Sloth told us about the injuries he received the last time he was here, attending a The Last Exit For The Lost Presents Show, he broke his nose, and fractured his orbital bone in the pit there, he reported to us how he is doing.

There were segments of Movie Time, and some TV programs were discussed as well. The last hour was The Old School Hour, with the last three songs all by Dio, in tribute to him, as it is the five year Anniversary of his passing. And thus went our MORE Pants Day Show, although there were a lot of pants in the room, unfortunately, they weren't on people, a lot of people were pants less... Not exactly how we planned it to go, but, oh well, what can you do? It was quite an eventful night...