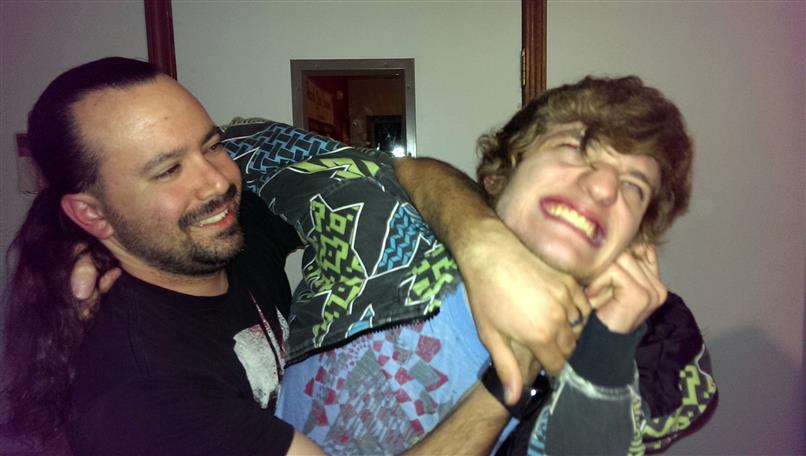 Present were, EVD, Just Joe, and, Nathan. It had been Just Joe's Birthday about a week and a half back, either on Tuesday, October 6th, or, on Wednesday, October 7th, he has said both dates at different times, I don't think he knows, so I don't either, Happy Birthday, Joe! So, this was kind of a celebration of that, although it was said that his real Birthday Show would be the following week, but he did get some presents this night, and got to pick some music he likes. His first present was from Arydaea, she gave him lip balm, made, apparently, out of all natural, organic, chicken poop, from free ranging chickens, there is even a web site for this, and probably other products made from chicken poop, just in case you're interested, it is, www.ilovechickenpoop.com Then Azkath gave Just Joe a present, an empty can of Tab (Just Joe likes Tab). Azkath said that that had been a mistake, yeah, right, I'm suuure it was(!), that Just Joe's can of Tab was in the refrigerator, upstairs, and told Just Joe to go get it. He made it sound like something would probably happen to him, but nothing did, Just Joe came back, happy, with a full can of Tab. But then EVD, being the evil person that he is, his initials do stand for Evil Villainous Dude, after all, had some suggestions. There was a pack of twelve cans of Tab, Just Joe actually suggested that they might hide them around the building for him to find, then EVD suggested that, as he found them, he had to drink them right away, and that he couldn't go pee, 'til he had found, and drank, all twelve of them. Azkath, also being evil, liked those suggestions a lot, and told Just Joe that that was what was going to happen. As the night wore on, Just Joe became increasingly more and more uncomfortable, as he found and drank more cans. He also found several Tab keys on keyboards, and brought those, too, along with one thing that he tried to claim was also a Tab, but looked like nothing anyone had ever seen before, long and round, Azkath told him it was not a Tab. But cudos to Just Joe for thinking of that Tab key on the keyboard thing, quite clever, I didn't know he was that smart, I don't think I would have thought of that! By the time there were eleven empty Tab cans, Just Joe was about ready to burst, which was when, of course, Azkath gave him a beat down, for being too loud on the microphone. Just Joe stole Nathan's shoe, and was putting it over his, um, well, his penis, to help hold in all that Tab. Then Azkath asked him what was that behind his lap top? Was that an empty can of Tab? Was that the original one he had given him as a Birthday present? It was indeed, and Azkath told him that that one had counted as part of the twelve, so he had been looking for a twelfth hidden one, when, actually, only eleven had been hidden. Just Joe raced off to the bathroom, where he stayed for quite a while. Instead of there being one Old School Hour, at 2:00, there were two of them, from 2:00 to 4:00, because it was his Birthday night, Just Joe got to pick a lot of the songs in the first Old School Hour. He brought a CD, with Libach's cover of Europe's "The Final Countdown", and then got all giddy and ecstatic when Azkath played it. Azkath tried to explain to him that it wasn't really the song he wanted, because it wasn't Europe, but there was just no dampening Just Joe's happiness, apparently he no longer cares if Europe's version is played, as long as it is the song, he's happy. So, I guess if Azkath wants to torture him about that, he'll have to refuse to play any version of that song, as Just Joe can no longer distinguish. The Cover set was late, because of The Old School Hour actually being two hours long this time, but, when it happened, it was nine cover songs, in about ten minutes. There were segments of Movie Time.

Galactic Cowboys "Circles in the Fields"
Fields of the Nephilim "Darkcell A.D."