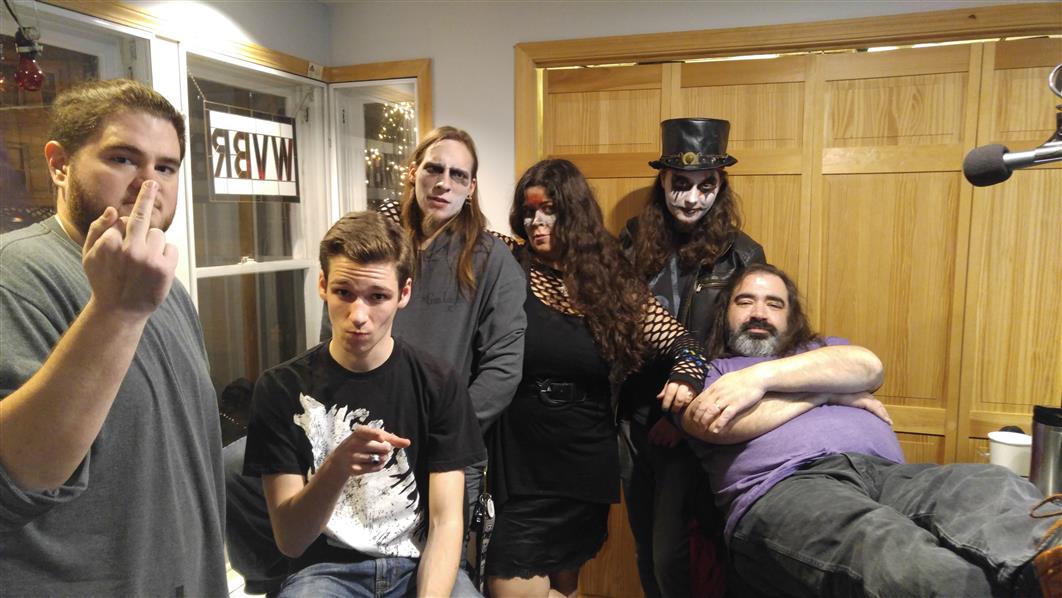 Present were, EVD, Nathan, Justin, Eric, Bi-Coastal Tim, Dylan, and, three fifths of the band Undead Messengers. Both EVD and Eric had had Birthdays, EVD's on December 4th, and Eric on December 11th. Happy Birthday EVD and Eric. When asked where he had been last week, EVD kept insisting he had been here. But Ouija Beard was back, Tim rubbed it a couple times. A Gopro camera was put on Nathan, and he was bashed in the head with a baking sheet. Then Dylan actually wanted to get bashed in the head with it, so he wore the camera, and was clobbered in the head, many times, to no reaction, apparently he is a lot like Eric, he can't be hurt, and seems to like it. Although later her had quite the headache and had to lay down (which then ended up being a game of things on our Dylan - See Pics). A couple of sets of music were played comprised of some of what Azkath felt were from the best releases of the year which is rapidly coming to a close. There were also several sets of Christmas music, metal and comedy songs and sketches. There was a second installment of The World According To Eric, where Eric rambles on about stuff which is representative of no one's views, including Eric's. There were segments of Movie Time. The Old School Hour was at 2:00. And there was A Cover Set.

HPLHS "Death to the World"
Phil Johnson and the Roadside Attraction "Rudolph the Blood Soaked Reindeer"
Pandora's Toybox "Slaves to the Sleigh"
This Will Hurt You "To Gain Carnal Knowledge of St. Nick"
Psychostick "Jungle Bell Metal"
Smashy Claw "Carol of the Meh"

The Fump "1,000 Fumps"
Prong "Ultimate Authority"
Meka Nism "From Out of Nowhere"
Psyche Corporation "Dance for Me'
Yonder Realm "By the Fangs that Weep"
War Atrocities "Mayhem Mongers"
The Misfits "Vampire Girl"

Year of the Goat "Riders of Vultures"