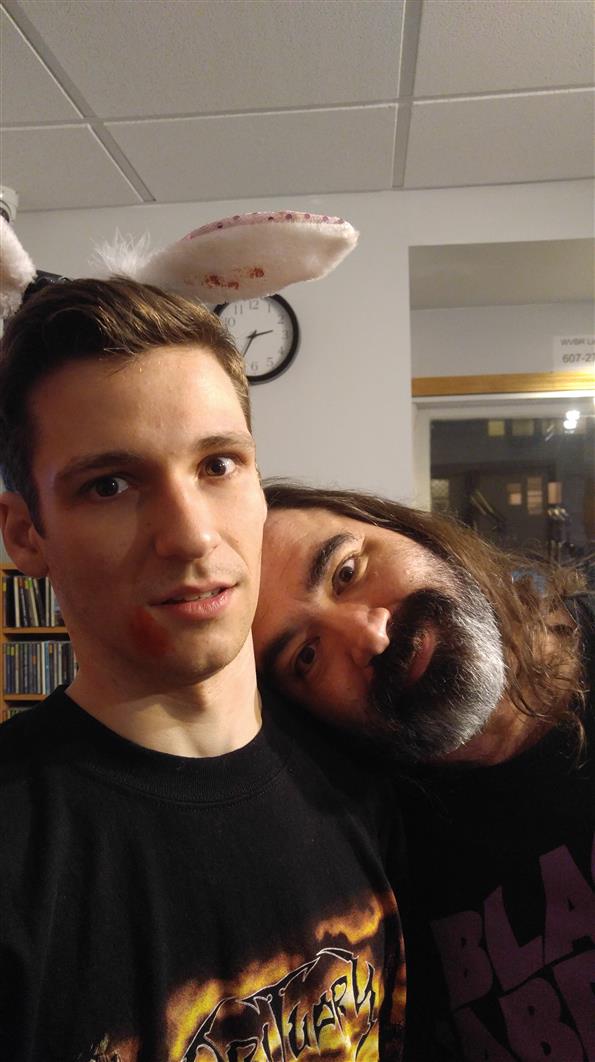 It was Easter Sunday, so this meant, of course, that it was our semi annual We Love Satan Show, the other one being, of course, Christmas, which also fell on a Sunday last December. Just Joe has become smart enough, I know, the words Just Joe and smart aren't usually used in the same sentence, but, it took him a while, but he has finally learned to avoid these Easter Shows, because he knows they will make him be The Easter Bunny, and kill him, many times. As Justin isn't usually here on Easter, he's usually home, it was decided that this year, he would get to do the honors. Justin was excited about this, because he didn't know any better yet. When he put on The Bunny Ears, he did notice that there was something on them that looked like dried blood, but they assured him it was chocolate. And not to worry about the duct tape on them, that was only because they were getting old, and just needed some repair. They told him to go hide, and that, whomever found him would get to kill him, but that not to worry, because Easter is all about resurrection, that they would pour water on him, and he would come back to life again, and that he wouldn't even remember what had happened to him anyways. And this needs to happen, because, last year, for the first time ever, The Easter Bunny, Nathan, successfully avoided being killed, and hell froze over, and it required a virgin sacrifice (Kevin), to put things right again. Justin, however, hid so well that no one could find him. But we lured him out by pretending that there was an adorable little kitten in the room, Justin can never resist cute cats. He emerged from his hiding place, and EVD strangled him, and broke his neck. They left him dead for a while, because it's fun to look at a dead Easter Bunny. Then they poured water over him, and Justin came back to life, not remembering what had happened, and wanting to know where the kitten was. Azkath killed him again by bashing him over the head with a baking sheet, which now had Easter Bunny impressions on it. Again they left him dead for a while. Then brought him back. Justin now wasn't acting quite right, I know, he never did before, but now he was doing disturbing things with Easter eggs, putting them on his eyes, and around his neck and stumbling around. He said he needed to go home, and did, at least that's where he said he was going. Two bands performed this night. First up was Poindexter. It was their first time here. They performed for about a half hour set. They were interviewed, telling us about themselves, and a track from one of their CD's was played. They are cool. You can find them at buffalopoindexter.bandcamp.com and, facebook.com/buffalopoindexter Next, the band RADII performed some songs trying to summon Satan. It worked, but there were two Satans, as both of them became possessed, and no one could figure out who the real Satan was. They hung out for a while, then left, saying something about being needed at the white house. And, of course, all of the music played this night was about, for, and, inspired by Satan, Metal, and comedy, and some Easter songs as well, metal songs, with Easter in their titles. Thanks to Nathan for doing a great job as usual running the sound all night for two bands. Before they performed, and became possessed, RADII hung out as co-hosts. They are a cool band, you can find them at facebook.com/radiitheeye And thus went our We Love Satan Show for this Easter...

Listen to the Show...